When British director Ridley Scott was filming his 1982 sci-fi cult classic, Blade Runner, he instructed his crew to build their dystopian Los Angeles set to look like “Hong Kong on a bad day.” Filming long before the city became part of the People’s Republic of China, which as a Communist Party-run country is associated by many in the West with Big Brother forms of control, Scott realized something that many outsiders did not: Hong Kong was already a city of high surveillance. University of Houston Professor Karen Fang tackles the history of this aspect of the metropolis in her new book, Arresting Cinema: Surveillance in Hong Kong Film. She shows that Hong Kong has for decades been a metropolis where the movements of people have been tracked by watchful eyes, and she zooms in on how the movie industry has documented the progression of surveillance techniques from the days of black and white film to the present.

I thought about Hong Kong differently when I lived there throughout the 1990s.  I always felt a profound sense of relief when I returned there after spending time on the mainland. On the other side of the border, I had to register with the public security bureau when I stayed with local friends. A hundred eyes were on me when I bought fruit on the street or strolled through the small city where my former husband grew up. Nothing seemed to go unnoticed in China. But Hong Kong felt different. I enjoyed a sense of anonymity when walking through crowded parts of Hong Kong Island and Kowloon, as well as spending time in the serene section of the New Territories where I lived. People left me alone and I thought of myself as being as free as the city’s laissez-faire economy. But according to Fang, I had it all wrong. Surveillance in Hong Kong, she writes, is “all the more intriguing because it has developed almost without notice.”

Her premise is as fascinating and bone chilling as some of the film noir flicks she describes. She claims that work in cinema studies and surveillance studies alike have ignored non-Western movie industries like Hong Kong and have therefore defined surveillance only in Western terms. Although Hong Kong is a small territory, it is significant in film studies because it has created one of the largest and most profitable movie industries in the world. Built by powerhouse studios like Shaw Brothers, the Hong Kong film industry has also influenced Hollywood over the decades. Sir Run Run Shaw, for example, helped finance Blade Runner, and a Hong Kong choreographer was responsible for the influential fight scenes in The Matrix.

Surveillance film in the West goes back to Hitchcock’s 1954 thriller, Rear Window. According to Fang, the concept of surveillance in the West refers to “social, spatial, and data monitoring” that is “intrusive, perverse, repressive, and violent.” But it doesn’t have the same connotations in Hong Kong. A year after Rear Window came out, a Hong Kong movie studio produced a remake with the same set and surveillance techniques. But Backyard Adventures didn’t involve a murder and, most importantly, didn’t treat voyeurism as a bad thing.

For a city with a large population of refugees living in cramped quarters, surveillance in the form of voyeurism wasn’t only inevitable in the mid-1950s, but necessary. Informal neighborhood watch groups monitored the comings and goings of residents to protect against burglary and other crimes. Surveillance in this case did not take on the repressive, violent, and negative implications that it would in the West, but rather served as a way to promote order. Popular in the fifties, sixties, and early seventies, tenement movies took on a “distinctly tolerant and humorous perspective that often distinguishes Hong Kong from most other world surveillance film.”

The ability to spy on neighbors lessened in the 1960s and 70s when Hong Kong residents moved into new public housing estates that afforded more privacy. But surveillance took on a new champion at this time: the Royal Hong Kong Police. The local film industry was its staunchest supporter and, according to Fang, nowhere else in the world have a local police force and a film industry been so intertwined.

The first era of police and film industry cooperation lasted from the early 1970s until the mid-1980s. To help lift itself out of a long spell of corruption, the public relations department of the Hong Kong force employed communications experts, some of whom went on to become renowned film directors, such as Ann Hui. Likewise, the comedy and action star Jackie Chan was instrumental in the rise of the police film, often portraying upstanding cops on the screen.  The industry became so interwoven with the police that the lines between the two often blurred.  This was especially true in the case of Philip Chan, a real life police officer who first starred in promotional films for the force before becoming a feature film star—always playing a cop.  Someone Fang doesn’t mention him in her book, but certainly could have is the actor, director, and producer Danny Lee.  He so revered the police that he tried entering the force in his late teens. He wasn’t successful, so he turned to acting and was known for playing police characters. Director John Woo also fetishized the force, often casting himself in cop cameos.

Police movies continued to be a hot commodity in Hong Kong, but after the 1984 Sino-British Joint Declaration, cops took on a new role on screen: protecting the colony from a hostile takeover after the impending Handover. This especially became true after 1989’s Tiananmen crisis. Surveillance in films from this “reunification era”—no mater the genre—not only involved the police, but also closed-circuit television—a medium that interesting and in some ways ironically shares an abbreviation, CCTV, with mainland China’s main television station—and telecommunication devices like pagers and cell phones. Fang describes these new gadgets, which made important marks on Hong Kong well before becoming mainstream in the US, and the smart phones that follows as facilitating “operations of mass electronic data mining that are now widely recognized as one of the most common means by which global citizens are subjected to social, spatial, and information monitoring.”

Hong Kong movies during the lead up to the Handover took on a US-style Cold War paranoia, which “helped promulgate a politicized Sinophobia that equated the coming change with a descent into repression and uncertainty.” The villains were always Mandarin-speaking mainlanders; the heroes the Cantonese-speaking Hong Kong cops. According to Fang, the point of surveillance in these reunification movies was “the means by which a prosperous city can protect itself.”

But just before the Handover, a new sub-genre of reunification surveillance film popped up. Suddenly actors like Mainland-born Jet Li became heroes and characters the Hong Kong police could work with, as demonstrated in movies like The Bodyguard From Beijing. Fang refers to this sub-genre as “joint venture” film, which manifested “a growing, tactical unwillingness to antagonize the coming government that results in increasingly celebratory portraits of mainland authority.” The change in the film industry’s outlook toward the Handover also served to calm public anxiety over the sovereignty shift, an anxiety that the industry had previously fostered.

I left Hong Kong eight months after the Handover, just as the film industry changed yet again. Since then, Hong Kong film has become almost unrecognizable from what it was during the reunification era of the 1980s and 1990s. Hong Kong production companies now film a good percentage of their movies in China, often coproducing with Mainland studios. Many more actors in Hong Kong films are Mandarin speakers from the Mainland, and they no longer only play the villains. The industry as a whole is putting out a fraction of the films it made back then and in earlier time.

Even with all these changes, the theme of surveillance is as strong as ever. It figures centrally, for example, in the Infernal Affairs movies, which inspired a Martin Scorsese Oscar-winning US-remake: The Departed. Some Hong Kong directors like Johnnie To have “gone undercover” in post-millennial surveillance films like Drug War, a police movie set in Tianjin. At first glance it appears as if the tables have completely turned since the reunification era, as the only Cantonese speakers in Drug War are Hong Kong drug lords. Through its high-tech surveillance methods, China is portrayed as a superpower not to be messed with, down to the capture and execution of the Hong Kong bad guys. No Mainland censor would object to China coming out ahead in Drug War, but To’s message, according to Fang, is clear: if Hong Kong doesn’t watch out, it will be crushed, just as the Cantonese drug lords were in the film.

Fang’s book is a quick read, yet dense with accounts of surveillance films from the past sixty years. Her examples are not all-inclusive, but they prove her points well. The number of movies she brings into her account is notable.  Her endnotes provide additional insight into her arguments and the bibliography she provides is extensive.  In short, it has much to offer both to those, like me, always fascinated by the city that is its focus and those who may not realize before reading it just how significant the place has been and remains.

It is also in some ways a timely book.  Hong Kong now stands at a curious juncture.  On the one hand, a pivotal local milestone moment is nearing, for the twentieth anniversary of the Handover is nearing, at a time when different groups are advancing sharply diverging views of the current state and future prospects of the relationship between Beijing and the city, and struggles are already underway over issues relating to policing as protest groups have been denied permission to hold rallies in traditional locations on the politically charged date of July 1.  On the other hand, a distracted world sometimes seems largely uninterested in the drama playing out there.  Fang’s book reminds us that there are many reasons to keep an eye on the city, including the way that eyes are kept in the people there and how this surveillance is portrayed in films.  As she suggests at the end of her book, Hong Kong has often been at the forefront of global political trends, and given its history, no one should be surprised by its leading edge in surveillance technology. In her concluding chapter, she writes, “where goes Hong Kong, so goes the rest of the world.” 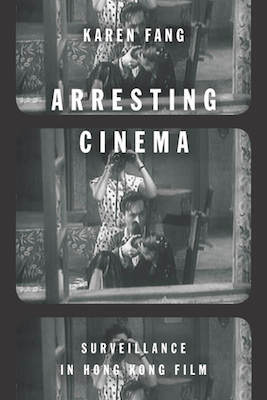