As part of Chinese TV’s efforts to commemorate the 80th anniversary of the Long March this year, a dramatized 30-hour version of Edgar Snow’s Red Star Over China has just wrapped filming. The book, which recounts the months in 1936 that Snow spent with the Chinese Red Army, is well known in China. The personal lives of its author and his wife Helen Foster Snow, however, are little known beyond their relationship to the famous Chinese leader Mao,  who died forty years ago this week and whose record continues to be described as 70% good and only 30% bad, despite catastrophes like the Great Leap Famine. Red Star Over China is the first domestically produced series to star two non-ethnic Chinese actors. The series is also partly biographical, retracing the early days of Edgar and Helen’s romance in Shanghai in the early 1930s and following their adventures in China through to the early 1940s.

The enduring popularity of Red Star Over China (and the Communist Party’s official embrace of Edgar Snow as a “Friend of China”) has ensured that Edgar has remained well known. However, Helen (who also wrote under the pseudonym of Nym Wales), remains far less well known and their personal relationship and marriage quite obscure. Edgar and Helen met in Shanghai shortly after her arrival in the International Settlement in the early 1930s where they were both carving out journalistic careers. Helen agreed to marry Edgar after multiple proposals. They moved to Peking, where Helen wrote, modeled furs, and became part of the city’s social set. Helen later followed Edgar to the “Red Areas” to report on the Communists and wrote about her impressions of them separately.

Red Star Over China‘s initial success (followed by state promotion of the show) has rather obscured Helen’s own literary work, Inside Red China (1939). Together they founded the short-lived Democracy magazine in their Peking courtyard home and became involved in the INDUSCO co-operatives project (a left leaning movement in the 1930, involving various Western expatriates, to promote grass roots industrial and economic development in China). Helen and Edgar split in 1940 and finally divorced in 1949. After her return to America Helen’s literary output continued with, among other books, Red Dust (1952) and her excellent memoir My China Years (1984).

Elyse Ribbons is an American actress who’s been working in China for 14 years and is well known to Chinese TV audiences by her Chinese name Liu Suying (柳素英). She recently spent the first five months of 2016 starring as Helen in Red Star Over China. During filming she became an ardent fan and somewhat of an expert on Helen Foster Snow and has been keen to promote greater awareness of Helen’s life, experiences and writings.  I caught up with Elyse shortly after filming finished…

Red Star Over China and Edgar are still so well known in China, but Helen has rather slipped from history and her books are rarely republished these days. Did you come to the part with any prior knowledge of Helen?

Of course I had read Red Star Over China in college, and was sitting with some rather famous Old China Hands (and their children/grandchildren) many years later at an event in Beijing and heard stories about Helen Snow, though her impression in my mind was vague at best before beginning the production. Mostly I knew that my life had inadvertently echoed her own:  She had moved to China on her own in her early 20s, she dreamt of being a writer, worked at the US Consulate (while I wound up at the Embassy) and she fell in love with China.

Both in Shanghai in the early 1930s, and then in Peking, Helen and Edgar were really part of a fun expatriate set of journalists, writers and sojourners. They partied a lot in Shanghai and even owned a racehorse in Peking…is this, much less well-known in China, side of Helen’s China experience brought out in the series?

A little bit, there are several scenes of parties and hints at the excesses, but the series is a bit of a propaganda piece so there was a lot of fighting on my part to portray the vibrant, fun, life-of-the-party Helen that those on the social scene in Peking and Shanghai knew. Chinese audiences really only have the vision of Helen in Yanan, in a Red Army uniform, in their minds. I had to constantly refer to historical texts and photos to convince the directors to move in my direction.

Helen and Edgar’s relationship, and rather quick marriage after meeting, have always been fascinating. On one level they seem a very fun couple, very much in love and enjoying their shared China adventure. However they drifted apart. Everyone always says it was the war, the Japanese, Edgar’s commitment to the Left…did you get any sense of their actual personal dynamic?

Well, their relationship started out very much as a bit fangirl on Helen’s part, but then Edgar quickly became enamoured and proposed to her many, many times before she eventually agreed. I get the sense that if they had lived in this era she might have played the field a lot more (and she does hint at other lovers in her memoir). I think that their love and later marriage was fueled in large part by their career aspirations and the adrenaline-fueled rush of living it up in wartime China while the Great Depression raged at home. The true “third wheel” in their relationship came in the form of Mao Zedong, who certainly entranced Edgar to the point where he allowed himself to somewhat knowingly become a propagandist (even though he had railed against this earlier in his career). But their passion for each other, while not filmed (this is China, so the few times the actor playing Edgar – George Tronrsue – and I kissed or acted too romantic, the whole crew would start giggling and blushing) was definitely something that lasted. But I don’t think Edgar wanted the quiet American life that Helen craved by the end of the 30s, and he moved back only grudgingly, spending much time away covering the war in Europe. But I definitely got the sense from Helen’s writings, and mentions of her in other texts, that she was vivacious and much-admired by many men, and not as often by her husband as she would have liked.

Edgar is invariably shown as the more political of the two, very sympathetic to communism. Helen often portrayed as his loyal follower. Yet she wrote extensively on the communists, as well as Korean nationalists, and the role of women in China, among other subjects. In the series do we have a sense of her own politics, as distinct from Edgar?

I think that Helen was not a Communist so much as a practicalist. She saw that China needed better leadership than the KMT could offer, and better connectivity to the “People”. She was definitely inspired by what she observed in Yanan and the other Red areas during her trip. A good portion of the Founding Fathers of the PRC also felt that Communism was just a tool and Deng Xiaoping is a good example of that train of thought. She was mostly impressed with the efforts that the Communists were making to include and empower women – a smart move, she noted, as they made up so much of the populace. Certainly I feel that China’s economic rise (and its entire future) relies heavily if not entirely on its empowerment of women.

It was tough being in China and reporting in the 1930s and presumably even tougher for a woman. Aside from the cult of Edgar in China and the downplaying of Helen did you get a feel for her as a woman experiencing that time?

Admittedly part of the cult of Edgar is Helen’s own fault. Like many women, she put her husband’s career above her own and spent her time and energy managing him, typing his notes, organizing his writings, efforts and correspondence. She is also uncredited for much of her work on Red Star Over China. But despite this, and despite the era, she embraced her life and her role with more verve than many a modern American girl. Really the problem was that when the INDUSCO project failed, she believed that all her efforts over the years had come to naught – and that broke her heart. As an entrepreneur here in China myself I am all too familiar with this heartbreak, and in all honesty found much strength in embodying her over this past Spring. If she could do all that she did with her limited resources and societal assumptions, surely I can keep fighting on.

It’s fantastic that the producers of the TV series have included Helen as a major role, and sought to portray the Snows China experiences in their entirety, and not just meeting Mao. How do you think a modern audience in China will react to this new, more rounded, Helen? What reaction are you expecting to the show in general?

As the show is still suffering through the rounds of censorship at CCTV as we speak, it’s really hard to say what will even make it into the final cut. But certainly having a lead character who is a known Old Friend of China (this is an actual title that the government has bestowed on several lucky foreigners) be the embodiment of all that feminine energy and aspiration I think will ring very true with the young women of modern China. Really the show is a love story, and one with a not-so-Hollywood ending for the couple, but certainly their love for China and personal friendship endured long after their marriage ended.  I wish that it could have been filmed by a Netflix, BBC or HBO crew, there’s so much more to the story that was overlooked but which makes for very good TV, a mix of House of Cards, Newsroom and a BBC historical drama. 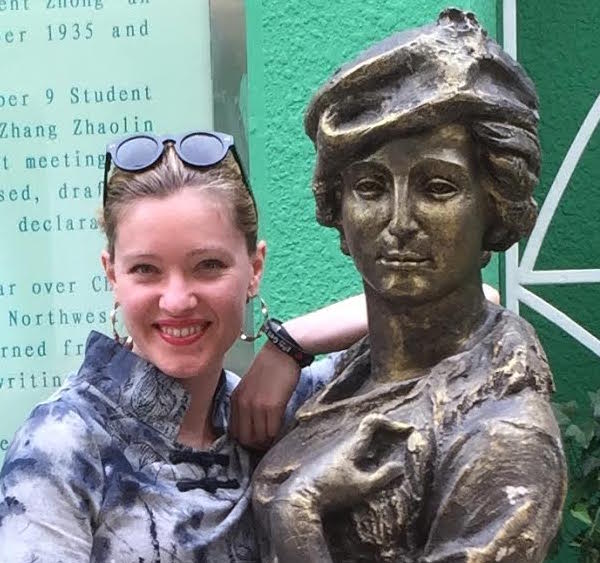