Fiction by foreigners in China has lost its sheen considerably since the days of André Malraux’s Shanghai classic La Condition Humaine (Man’s Fate), which won the Prix Goncourt in 1933 despite being, frankly, turgid. (It also later emerged that Malraux had concocted many things relating to his claims and his research.)

Modern spy novels, such as Adam Brookes’ Night Heron, still make for great reading, but a surfeit of homegrown Chinese writing and, perhaps, fear of “cultural appropriation” has diminished an appetite for serious fiction-writing by foreigners, with some notable exceptions: Susan Barker’s The Incarnations and Jack Livings’ short–story collection The Dog.

Over in China, the “expat novel” is considered a punchline among old hands; last year’s publication of one particularly hopeless memoir prompted a friend, and fellow LARB contributor, to sarcastically wonder if, somewhere in Beijing “a nondescript borderline-alcoholic English teacher might be polishing off the manuscript of the China equivalent to The Sun Also Rises.”

While I can’t speak to author Quincy Carroll’s current drinking habits — for all I know, he might be a perfectly reasonable dipsomaniac — his debut Up the Mountains, Down the Countryside is probably as close to that novel as we’re likely to get, or want. (Carroll is an MFA graduate who’s worked for an NGO teaching in Hunan; the title is an elegiac reference to the dispatch of Red Guards to provincial farming communities during the Cultural Revolution.)

In this assured, if occasionally florid debut, the author deftly skewers two symbolic opposites who wind up teaching together at a no-mark suburban school in the equally dreary Hunan city of Ningyuan.

Thomas, the elder, is a 60-year-old Minnesotan deadbeat whose charmless cynicism might be his only (vaguely) redeeming quality; enthusiastic Sinophile Daniel, meanwhile, is a bright-eyed youth with stretched earlobe piercings and bright-red hair, whose fondness for strumming the guitar, while crooning folk songs to his adoring students, marks him out as an irritant of an altogether different calibre.

While idle Thomas, “arrogant, lewd and racist,” regards the didactic enterprise with little more than a rapacious, occasionally salacious eye, Daniel prepares lesson plans from scratch, tries to institute a library (it gets taken over by a divorced faculty member as a crash pad), and hikes the outer hills of Ningyuan like it’s the Lake District, viewing even the most mundane details of rural Chinese existence with the keen-eyed interest of the amateur anthropologist.

Clearly, the novel’s two male leads are set for some form of explosive collision, the catalyst for which proves to be Bella, a naïve and overfamiliar student whose urgent wish to ingratiate herself, and enjoy the full “Western” experience by studying abroad, is almost as wearying as Thomas’ studied surliness. While Daniel is likeable, even charming by comparison, Carroll takes care to salt the conflict with some yin to his yang. He’s prone to mildly absurd gestures, such as handcrafting an Aeolian harp out of reclaimed wood, and his excessive idealism is punctuated by a needy self-regard (“his students appeared to love him, and Daniel had no idea why, over the course of a year, the two of them had not become better friends”).

The denouement to this near–allegorical clash of the totems comes over a Spring Festival meal at Bella’s family home, which includes a divisive and revolting braised dog’s paw — the ensuing fallout is contrived yet satisfying: At just over 200 pages, Up the Mountains doesn’t outstay its welcome.

If the idea of two teachers feuding in Asia sounds as hackneyed as a tell–all Shanghai sex memoir, consider that, in another era, this could just have easily centered on the rivalry between a noble missionary and a foreign mercenary in war-torn Qing times. The supporting Chinese cast, moreover, is certainly more deeply drawn than Thomas and Daniel, who sometimes feel like vehicles for Carroll’s deeper point.

Via email, Carrol explained he “felt like there wasn’t a lot of honest fiction out there about foreigners in China,” and the book was a reaction to his own self-doubts about those who seemed “either complete failures or totally lost in life.”

Examining the inclination for Westerners to gravitate toward (or occasionally repel) each other overseas, Carroll deconstructs the belief that waiguoren, foreigners, are imbued with some mutual heritage — a fallacy not unlike Beijing’s presumption that “all Chinese” (all Han, at least) are obligated toward an ancient, mystic kinship that transcends nationality or upbringing. Meanwhile, back on Earth, here’s to the renewed quest for the Great American (in China) Novel.

Robert Foyle Hunwick is a media consultant and editor at large for BeijingCream.com. Up to the Mountains, Down to the Countryside (Inkshares, 224 pp, $15.95 rrp) is available at Barnes & Noble, independent bookshops, and Amazon. 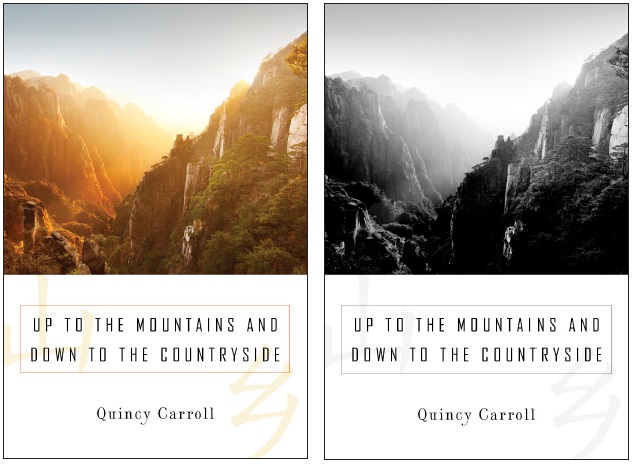