On August 18, while some Americans were planning to go to watch an expected total eclipse of the sun, word broke that there had been an unexpected partial eclipse affecting works of scholarship on the Chinese mainland. Cambridge University Press announced that it had complied with a request to make over 300 articles and book reviews disappear from the Chinese website of one of its journals, the China Quarterly. Outrage was immediate and widespread, as nothing quite like this had ever happened before, or at least was known to have happened before. By August 21, the day of the American eclipse, the China Quarterly articles and book reviews that had been temporarily hidden from sight reappeared (along with a statement from the press about the change).  A lot has been published about all this by now, but what appears below is an unusual, previously unpublished historical document. It is by French Sinologist Michel Bonnin, author of an important book titled The Lost Generation: The Rustication of China’s Educated Youth (1968-1980).  He drafted this letter to the Chinese authorities on August 21, just before finding out about the reversal (one reason, perhaps, that it was not ever actually sent), and he is kindly allowing us to carry here.

Dear Director of the General Administration of Press and Publication,

During the last few days, I have been reading about the fact that Cambridge University Press has accepted a request by your administration to delete from their Chinese website around 1000 e-books and 315 articles published and distributed by the China Quarterly.  When I saw that the Cultural Revolution and the repression of the Tiananmen democratic movement on June 4, 1989 were particularly targeted, I naturally assumed that my article in the recent special issue (N° 227) of China Quarterly dedicated to “Memories and Legacies of the Cultural Revolution” would be among those banned.**

I was shocked to see that my paper was one of two articles in this issue that did not make it onto the list of prohibited reading. This paper includes an important reference to June 4 as a decisive turning point for the Chinese people, marking the end of an optimistic hope in the future.  There is also a reference to secretary-general Xi Jinping as someone who has used his experience as a sent-down youth to generate political capital.  Either of these things should have justified its inclusion on the list of articles removed.

Yesterday, I received via WeChat a preliminary analysis of the articles that have been removed. To my mind, your subordinates have not done their job properly. There are quite a number of unjustly punished articles and a number of others, such as mine, which surprisingly escaped attention. I suppose that your subordinates have very heavy workloads. Still, I would like them to repair their mistake concerning my own paper. Its omission from the list makes me feel embarrassed in front of colleagues, who could justly believe that I have received undeserved special treatment. They may think that I engaged in some form of self-censorship when writing my paper.  Or they could even suspect that the favored treatment I received is the result of a special relationship that I have with the Chinese authorities. These and other interpretations could cast a shadow on my academic integrity.

Under those circumstances, I would like to ask you, with all due respect, to repair this injustice and add my article to the list of censored material from China Quarterly that Cambridge University Press has been asked to delete from its website. I am sure they would be happy to oblige.

* In the coming days, we will be completing our series of Q&As with editors of the LARB China Channel (for information on that forthcoming publication click here), with interviews with Anne Henochowicz and Eileen Cheng-yin Chow.  We thought that the interest in the issues raised in this post justified running it right away and delaying the posting of the last two interviews in that series.

** The special issue of the China Quarterly in question has also been published as a book, Red Shadows: Memories and Legacies of the Chinese Cultural Revolution. 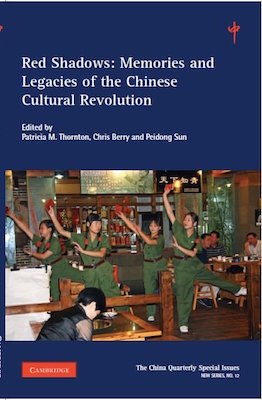