[Editors’ note: This is the first of a two-part roundtable interview we invited Alexander C. Cook, editor of the well-received Cambridge University Press book Mao’s Little Red Book: A Global History, to conduct with four scholars who have been doing important work on the final decade of Mao Zedong’s rule and were part of a recent American Historical Association panel that he chaired.]

ALEXANDER C. COOK: What is the standard “textbook” view of the Cultural Revolution?

DENISE HO: When we teach the Cultural Revolution here in the United States, our textbook version is that Chairman Mao, fearing “revisionism” within his own Communist Party, launched an attack on perceived internal enemies. Our students tend to be most fascinated with the Red Guards, young people who Mao called on to “make revolution” by joining him in an attack on the old world.

YICHING WU: The problem of mass politics has fascinated scholars, as well. Mao’s attempt to cleanse the Communist Party of pernicious “bourgeois” influences involved the mobilization of a ferocious mass movement. Many ordinary Chinese who responded to Mao’s call for rebellion had long been discontented with the established system and were eager to take advantage of the newly sanctioned “right to rebel.” For several decades, we have examined how the charismatic mode of mass politics mobilized existing societal antagonisms and effectively undermined the ruling party’s bureaucratic authority.

ALEXANDER C. COOK: How different is the standard view in China?

DENISE HO: One interesting thing is that the standard view in the West and the standard view in China overlap a great deal. Both our textbook version and the Chinese Communist Party’s official verdict (published in 1981) offer similar explanations: that the Cultural Revolution was Mao’s responsibility, that it was a period of great chaos, and that it was an ideological movement gone terribly wrong.

DENISE HO: In China the standard narrative is one of chaos, describing the Cultural Revolution as a “turbulent decade” in which not only were lives lost but also lives wasted. The official Party line is to lay responsibility at Mao’s feet but also to rescue his legacy; despite the Cultural Revolution being a mistake, the Party says, Mao was still a great revolutionary. Was the Cultural Revolution an aberration? To answer yes is to say that this was an extremist period and China has since returned to a path of modernization and development. To answer no is to suggest firstly that the Cultural Revolution came out of longer traditions, and that it has left a lasting imprint on Chinese politics, society, and culture. As historians I think we’re all trying to look for elements of both change and continuity.

DANIEL LEESE: Yes, and while Mao is blamed for having committed many mistakes, not everything of that 10-year period is officially negated. There were many continuities. It was not all chaos. The party continued to exist. Economic growth picked up as of the early 1970s. Also, China achieved foreign policy successes such as its 1971 entry to the United Nations.

ALEXANDER C. COOK: So the real picture is more complex than we have previously assumed?

YICHING WU: Very much so. First of all, the sociological interpretations that previously dominated the study of mass factionalism have been seriously challenged by a new wave of scholarship. This new research contends that mass political conflicts were not derived from preexisting sociopolitical grievances, but rather were shaped by contingent events and dynamic interactions between the masses and the political leadership. Second, scholars interested in the ideological aspects of the Cultural Revolution have challenged existing views for their tendency to over-systematize and over-interpret late Maoism. The newer works highlight areas of incoherence in the official ideology and explore how ambiguities became exacerbated by the chaotic political circumstances in which ideology was interpreted and deployed.

DANIEL LEESE: While a powerful coalition of party members and intellectuals victimized during the Cultural Revolution has dominated public discussions of the period — and, understandably, emphasized the ordeals experienced — some other aspects of the period are remembered and even romanticized. The recently purged politician Bo Xilai tapped into heroic memories of revolutionary fervor and revolutionary idealism for example by way of singing “Red songs.” Former Cultural Revolutionary activist Qi Benyu recently expressed the hope that current Chinese president Xi Jinping would become a second Mao Zedong, meaning he would curb corruption and lead China back on the path of socialist revolution.

ALEXANDER C. COOK: The Cultural Revolution has been romanticized from the beginning, and not just in in China. Why is that?

FABIO LANZA: In the 1960s, Maoism provided the vocabulary to describe and express new political ideas around the world. The global fascination with the Cultural Revolution has usually been viewed as orientalism of a sort, with Gauloises-smoking rive gauche intellectuals mesmerized by a revolutionary East they really did not know anything about — the “China in our heads.” But I believe we should take seriously the interest that activists and intellectuals around the world demonstrated for the experiment of the Cultural Revolution. Why should we? Precisely because they took it seriously at the time and because, no matter how misunderstood and misinterpreted it was, the experience of the Cultural Revolution seemed to be tackling head-on many of the issues of the day.

ALEXANDER C. COOK: What globally relevant issues did the Cultural Revolution touch upon?

FABIO LANZA: First, the Cultural Revolution addressed directly the relationships between learning and teaching, politics and education, theory and practice. It was then not strange for student protestors in Paris, Turin, or New York to see similarities and connections between the Red Guards’ attacks against stultifying university learning and their own actions against the school system in the spring of 1968. Similarly, the integration of politics and education that the Cultural Revolution proclaimed echoed the political challenge that student organizations spearheaded against supposedly “neutral” pedagogy in Mexico, Chile, and across Europe. Second, the blossoming of the Red Guards in 1966 signaled that people could independently organize themselves outside of the Party-State and even use those organizations to attack the Party or other centers of political power (“Bombard the headquarters,” as Mao said). Third, Maoism seemed to embody an alternative to the existing development models, either capitalist or Stalinist. This was an alternative that was described and perceived as more humane, one that potentially could produce progress without sacrificing the quest for equality.

DANIEL LEESE: In China in the early 1980s former participants in the Cultural Revolutions began to argue that the elite power struggles between Mao and his rivals need to be differentiated from the “public” dimension of the movement, with its salutary elements of mass democracy and anti-bureaucratism. These aspects are still held up by many old and new critics of capitalist exploitation as an alternative path to modernity.

ALEXANDER C. COOK: So they feel there are positive things we can salvage from the Cultural Revolution?

FABIO LANZA: The global appeal of Maoism was made possible by the fact that it did not offer a fixed model, a set of steps to follow, or a rigid scheme to apply. Rather, Maoism presented itself and was viewed as a method of analysis of reality and as the lived experience of revolution. The lesson of the Cultural Revolution was not one of easily transferrable programs, but one of a massive, and still open experiment; a localized but inspirational experience. In this sense, it was not a “Chinese thing”: as one French Maoist worker quipped at the time “we don’t give a f — about China.”

YICHING WU: That’s right. Conventional wisdom has portrayed the Cultural Revolution as merely an era of chaos and violence, in which culture, education, and literature and art were ruthlessly destroyed. The reality, however, was far from one-dimensional. Several recently published studies have carefully examined films, drama, music, dance, fine arts, and popular literature during the Cultural Revolution, arguing that Mao’s last decade, rather than a cultural wasteland limited to a few hyper-politicized revolutionary plays, in fact witnessed considerable cultural innovation and artistic success.

ALEXANDER C. COOK: Then we will pick up next time with the problem of culture…. 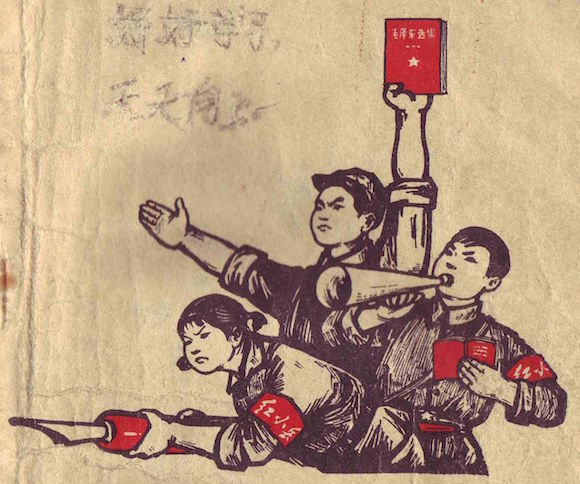