Editor’s Note: This is the third in a series of China Blog pieces by Louisa Lim, building off episodes of the Little Red Podcast, an excellent podcast that is hosted by Graeme Smith in collaboration with Louisa and distributed by ANU’s Chinoiresie. This post is based on Episode 12: Cooking the News: Xi’s Digital Future. Future posts in this series will appear as part of the LARB China Channel, which will launch in the fall (for some details about it, click here). JW

“If my future husband is like him, I will be happy.” The young Asian student with a chestnut bob smiles nervously as she sums up her feelings towards China’s President Xi Jinping. Her classmates utter similarly starry-eyed views of the country’s strongman president: very humble leader. Wise and resolute president. Handsome. Super-charismatic. His face is a little bit cute. These giggly eulogies are how foreign students described China’s President Xi Jinping in a 2015 video produced by the People’s Daily. Nowadays such cuddly familiarity is off the agenda as the Chairman of Everything tightens his grip over the media, pushing control into new spheres and regaining control over his own image.

The China Media Project, based at Hong Kong University, recently tallied mentions of Xi Jinping on the front page of the all-important party mouthpiece, the People’s Daily. It discovered that, in the first two years since he came to power, he had been mentioned more than any other leader, including even the Great Helmsman Mao Zedong.

Qian Gang rejects notions of a personality cult, despite that early rash of publicity when even the state-owned media was publishing animated cartoons of the man they called Xi Dada or Daddy Xi. But recently such nicknames have disappeared from the state-run mouthpiece. Equally important are the other words that have fallen into disuse with analysis showing terms connected to political liberalization no longer appearing in state-run media. In 2015, the People’s Daily mentioned “intra-party democracy” the fewest times in 14 years, while “political system reform” is also off the agenda. Perhaps most tellingly, corruption czar Wang Qishan was entirely absent from the front pages of the People’s Daily for the entire month of April.

Such changes in terminology are significant. “In non-Communist countries, it’s difficult to grasp the established usages of language,” says Qian Gang, “In Communist countries, there are established usages. The slogans are very sensitive; what you can say and what you can’t say, [and] how formulations are changed after a period of time — all these are governed by rules.”

As the 19th party congress approaches, media watchers are parsing public statements for exact formulation of words used to describe Xi Jinping’s ideology. The choice of noun — whether it is Xi-ism, Xi Jinping Thought, Xi Jinping Theory or Xi Jinping Concept — is a major decision, sending signals about Xi’s place in the party pantheon. To use Xi-ism or xijinpingzhuyi would signal ascendance to the pinnacle of power, theoretically placing Xi at a higher level than even Chairman Mao, a status that Qian Gang describes as “impossible.” The use of Thought or sixiang would signal the next level of importance, and in recent weeks, analysts have pointed to mentioning Xi Jinping’s Diplomacy Thought — Xi Jinping zongshuji waijiao sixiang — as possibly significant, though inconclusive.

One indication of tightened control is the fact that on the 90th anniversary of the establishment of the People’s Liberation Army, four separate state-owned newspaper had identical covers. One of Xi Jinping’s most high-profile visits in 2016, was to the headquarters of the three main media organisations, where news organisations gave a loyalty pledge to the party. The traditional role of the media in China is as the tongue and the throat of the party, channeling public opinion and disseminating its thoughts. Since 2013, Chinese journalists have been required to take an exam on the Marxist ideology in order to keep their press accreditation. “The primary role is fear,” says David Bandurski, co-director of the China Media Project, “It’s reminding journalists that you work for the party. Not for the people, the public, the party.”

That reminder has been underscored by Beijing’s treatment of journalists in recent years. At the end of last year, China was the world’s second biggest jailer of journalists after Turkey with 38 reporters in prison according to the Committee to Protect Journalists. In August, blogger Lu Yuyu was sentenced to four years in prison for “picking quarrels and provoking trouble,” even though human rights researchers say his only crime was to compile information that was already publicly available. Even business journalists have been targeted in recent years, with Wang Xiaolu from Caijing being forced to make an on-air confession for supposedly triggering stock market chaos with his reporting.

This assault on the media has led to an exodus from the industry, with 80% of front-line journalists in China now aged under 30 years old, and those who remain depressed about their status as Even the new media outlets tasked with covering contentious issues are hobbled; reporters from the Paper in Shanghai spent six months investigating one in-depth series on the Three Gorges Dam. The story was killed within seven hours.

Meanwhile the party’s message, which is increasingly unitary, is being pushed into new media platforms, according to Bandurski. “It’s called a hub in English, but in Chinese, they call it a kitchen, chufang. The idea is to have a centrally produced news agency for the new era that’s producing multimedia content that can be used by different news products on things like Wechat. They’re trying to find ways to control this new digital growth.”

That control is being channeled into multiple new prohibitions restricting access to news in China, in particular a ban on virtual private networks — VPNs — the software used to bypass Chinese censorship of the internet, which has controversially required Apple to remove VPNs from its app store. The streaming of live video has also recently been forbidden, while internet service providers are practicing taking down sites deemed harmful and China’s 89 million Communist party members face punishment if they visit “illegal websites.” “It’s about innovating control. That’s their vision,” says Bandurski, as he enumerates the Communist Party’s aims. “You can create a product that is controlled quite strictly in political terms and its impact is managed, yet people love to use it and it drives the digital economy. This is what they want. It’s the holy grail.”

In theoretical terms, China’s innovation — which it has pushed at international bodies including the United Nations — is the idea of cyber-sovereignty, which would allow each country to stop unwanted information at its own borders. This move to undercut the free flow of information underlines Beijing’s pursuit of an illiberal global order, and allows it to legitimize its own control over the borderless space of the internet.

Back in China, the digital revolution could presage an institutional change in the control of China’s media. Traditionally the media has fallen under the Propaganda Department in the past, but in future, he believes the media is likely to be controlled primarily by the Cyberspace Administration of China, a new super-agency directly under Xi Jinping. “The Propaganda department will start to fade and fight for relevance in the system,” Bandurski predicts. “This is a huge change.” With all information increasingly being transmitted by digital devices, the implications of such a change cannot be underestimated. 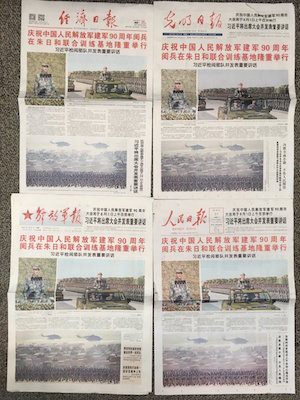