Editor’s Note: This is the second in a series of China Blog pieces by Louisa Lim, building off episodes of the Little Red Podcast, an excellent new podcast that is hosted by Graeme Smith in collaboration with Louisa and distributed by ANU’s Chinoiresie. This post is based on Episode 11: “Class: The New Dirty Word”—JW

“Never forget class struggle!” was Chairman Mao’s exhortation to the Chinese people. The phrase was daubed on village walls, stenciled on drinking mugs, even painted on toilets around the country. In Mao’s China, class background was central to every aspect of one’s existence, influencing everything from education to employment to the selection of marriage partners. Yet over time, the word “class” has slowly disappeared from official discourse. In Xi Jinping’s China, class — which evokes the Cultural Revolution-era trauma of class struggle and class enemies — has become politically incorrect.

“It’s just not trendy to talk about class,” says Sydney University political scientist Guo Yingjie, who has met with resistance — even from mainland academics — to his research on the topic. Talking about class is neither politically safe, nor politically correct, “It’s a dirty word. It’s almost something that many academics in China think is irrelevant.”

Such a strategy is underlined by the messages propagated through the state-run media, according to Wanning Sun, a media scholar from the University of Technology, Sydney. “If you want to get rid of class struggle discourse, one way the party has done this is to promote consumption so people get a sense of hope,” Sun says. “An ideology of hope — the neoliberal discourse — has taken root. Neoliberalism doesn’t like class discourse. As long as you find your position in the market, you’ll be fine.” In this way, class has become defined by consumption, and in some cases, conspicuous consumption.

Sun’s research explores the media depictions of rural-to-urban migrants who have become a new underclass in China. Their portrayal in the market-driven sections of the media underlines the alienation of migrant workers: “They can be demonized. They can be eroticized. They can be criminalized, appear to be nobody. The words or terms used can be downright derogatory. There is a whole range of discourses, but on the whole [they are] not in the business of lending voice to the workers.”

One attempt to redress the balance was the dating show Feichang Wurao, or “If You Are the One,” which ran two special episodes dedicated to finding love for migrant workers, who often have trouble in the search for partners. This well-meaning but misguided attempt backfired, since none of the female workers were willing to date a male migrant worker; all aspired to a partner who could elevate them into what they perceived to be a more middle-class existence.

In recent years, China’s exploding middle class has been a staple of Western media articles, with McKinsey estimating that by 2022, three-quarters of the urban population will be middle class. But many experts on class believe that the Chinese middle class is a myth, since the criteria by which it is measured is quite arbitrary, and income alone ignores other standards which are harder to define including education and suzhi, or “quality,” a more neutral term sometimes used as a proxy to talk about class.

Class anxiety is rife, since class mobility is surprisingly limited with many of the traditional routes to advancement, such as education, now shut down. Research by the University of Sydney’s David Goodman has found that around 84% of today’s elite are direct descendants of the elite from pre-1949. This suggests that six decades of Communism may not have a dramatic impact upon the elites, who have the advantage of decades of capital accumulation — including economic, cultural and social capital — which have apparently continued to benefit them under the party-state system.

Guo Yingjie has written that the new social strata “are not really classes in the eyes of Marxists,” underlining the deep chasm between China’s official ideology and practice. This presents a fundamental dilemma for the Communist party, which struggles to reconcile inconsistencies between its various ideologies, which include Marxism, Leninism, Maoism, Deng Xiaoping theory, and Jiang Zemin’s Three Represents, introduced in 2001, which allows capitalists to join the Communist party.

However, any attempt to revisit this part of Chairman Mao’s legacy is politically risky, since it would create perceptions of a fundamental shift in the party. The theoretical and ideological somersaults necessary to align theory and practice would be almost impossible to pull off. The result, as neatly is absurd, “In the past, class was eliminated, but our rulers decreed that people must ‘never forget class struggle.’ Now class has returned, but our rulers demand that class struggle be forgotten.” 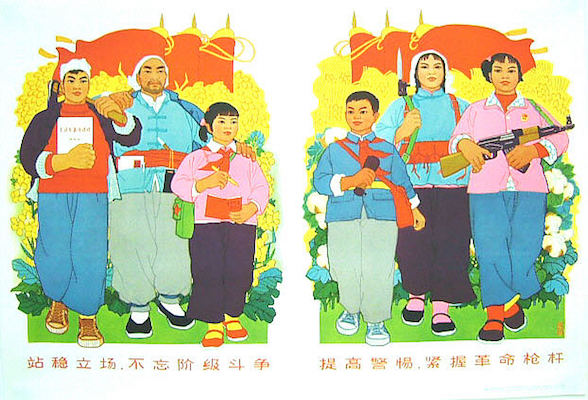