Whenever a new bout of state-sanctioned nationalist fervor in China makes headlines, I think back to the time in May 1999 when NATO bombs hit the Chinese Embassy in Belgrade, killing three citizens of the PRC and triggering protests. I happened to be in China then and spent an eventful week observing responses to the deaths in first Beijing and then Shanghai. I visited campuses to read and take photos of wall posters denouncing the United States and Britain, the two countries that had taken the lead in the moves against Serbia. I went near the American Embassy to watch a rowdy demonstration, and a few days later walked by the Shanghai Consulate where I saw its outer walls still festooned with the tatters of placards denouncing Washington that protesters had pasted on them, but also saw police lined up to make sure there would be no more further demonstrations there. At a Shanghai campus assembly devoted to the event, the main speaker, a faculty member, lauded students for having expressed their patriotism. He also said, in step with the party line of the moment, that the time for street action was over. He noted in closing (lest he seem insufficiently patriotic) that at times like that, when China was being bullied, he was glad that Beijing was among the countries to possess nuclear weapons.

These experiences, which I have written about before in essays and a 2007 book chapter, have been on my mind again in the wake of the Permanent Court of Arbitration ruling in favor of the Philippines and against China in the maritime dispute involving the two countries. Some completely predictable things have happened. Chinese officials and the country’s state-run press have alternated between dismissing the verdict as irrelevant, on the one hand, and criticizing it as unfair and the result of bias, on the other. There has been the expected flurry of online jingoism, as a mix of ordinary people and “50 centers” (the term for those paid a token fee by the government to make comments supporting the party line) have denounced the decision, and made derisive comments not only about the Philippines but also Washington, which is seen as playing a crucial and nefarious part in trying to block Chinese claims to islands, specks of land, or reefs that other Asian countries say are theirs. All this has fit into a familiar pattern. So, too, in a way, have the very recent state media calls for some kinds of protests to stop, as there generally comes a time in these outbursts, as there did in 1999, when the authorities worry about popular agitations, once unleashed, being too hard to keep running in acceptable channels.

There have also been some things happening that have been novel, albeit not really surprising, given how they resonate with past reactions to real and imagined slights to Chinese national pride. For example, a slew of celebrities, the globally famous pianist Lang Lang among them, have put up identical patriotic postings showing a map portraying the PRC as big as it is ever imagined to be, including the stretches of water inside the “nine-dash line” that is used to describe maritime areas Beijing claims. Along with this image have been characters declaring that patriots should not let China shrink by even “one dot’s worth,” in the sense of letting go of even a single island or moving any of those nine dashes. (These expressions of patriotic pride have not gone uncontested, as little does in our thoroughly wired and complexly interconnected world; some Vietnamese Internet users, for example, have posted comments saying that due to their own love of country they cannot remain fans of the Chinese celebrities in question, while Taiwanese have objected vociferously to Taiwan being included as part of the PRC in the online maps.)

Another example of a mix of the expected and the novel involve reports that some Chinese have taken to smashing their iPhones to show anger at America while others have been calling for a boycott of Philippine mangoes to punish Manila. The destruction of iPhones is reminiscent of the destruction of Japanese cars when anger at Japan ran high a decade ago. The move against mangoes is new, in the sense that this particular fruit has not been boycotted before, but it fits into a very long term pattern, linked to both state-sponsored and partly genuine nationalist upsurges and the purely bottom-up variety, in that there have been calls for boycotts of foreign products before in China during many different sorts of movements. An important early case in point was the anti-American boycott of 1905, which was launched to show displeasure with discriminatory U.S. immigration laws. A very recent example, tied to purely online as opposed to digital and street actions, was a call for mainland consumers to eschew buying the products of the French L’Oreal cosmetic group until it distanced itself from Hong Kong singer Denise Ho, simply because she had expressed her support for her city’s Umbrella Movement in 2014 and later met with the Dalai Lama. (Historical point: U.S. immigration laws didn’t change for decades, but within days, L’Oreal cancelled a concert it had planned to hold in Hong Kong that would feature Ho, though the plucky singer has, as Elaine Yu and I detail in a recent commentary, found creative ways to protest the French company’s capitulation.)

One thing that has interested some scholars weighing in on recent events and also some journalists, including Adam Minter, is what could have happened, but didn’t, when the verdict came down. Most notably, there were no rowdy demonstrations in city centers, of the sort that took place during anti-Japanese upsurges earlier in this century and in 1999. There were also no angry gatherings outside of embassies comparable to the ones I saw seventeen years ago; this time, police worked to ensure there would be any protests at these kinds of sites right away, rather than waiting for a few days to do this.

At first, as I tracked the response to the verdict from this side of the Pacific, I was struck most by the differences between what I witnessed on the other side of the ocean in 1999 and the current chain of events, despite seeing some parallels and things that conformed to a familiar pattern. In 1999, Chinese lives had been lost, which gave the sense of outrage a more human aspect than in this fight over bits of territory. The 1999 protests also had deeper connections to longstanding traditions of campus unrest than have recent expressions of nationalist outrage in China, including those of this year, which have not generally been so rooted at universities. The rise of digital and social media has changed many things as well. In addition, the current government seems even more obsessed with control than its immediate predecessors, and quicker to try to curtail even loyalist demonstrations due to worry that, once started, they could move in what it considers the wrong direction.

One thing that began happening this week, though, has definitely triggered powerful 1999 flashbacks—protesters in various cities lashing out at Kentucky Fried Chicken as a symbol of America. KFC was also a target of protesters in 1999, though often it was paired with two other icons of the American food and drink world, McDonalds and Coca Cola. Don’t eat the Kentucky Fried Chicken, don’t eat Big Macs, don’t drink Coke was a tripartite theme in more than a few posters I saw. 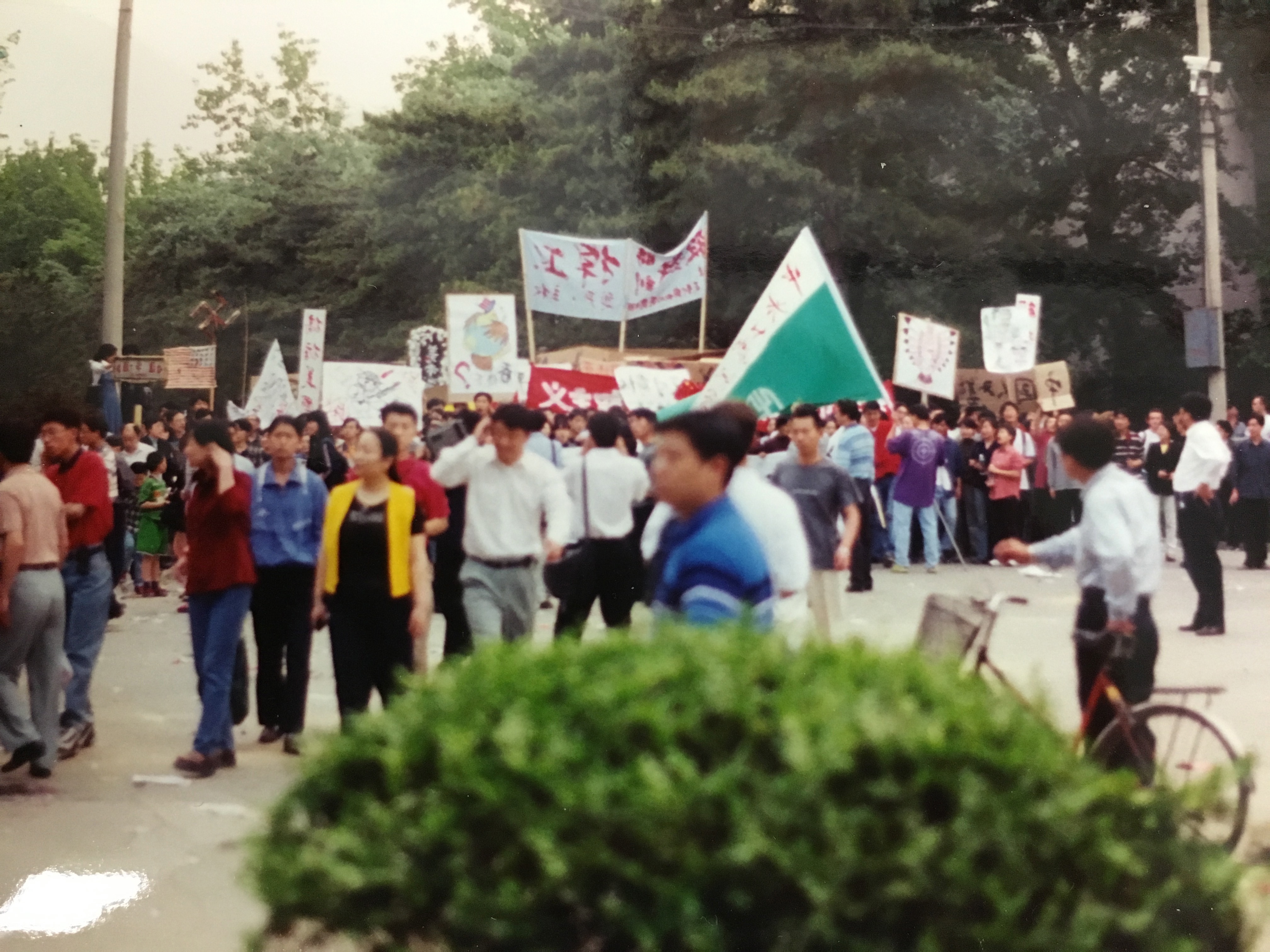 Someday, this latest KFC boycott may become part of a master’s thesis on the political as well as business-related story of the Colonel’s brand’s Chinese adventure. I’ll end here, though, with just a few final thoughts relating to it, and some photos I took at the time that I’ve found interesting to look at again while the latest nationalist outburst in China is in the news. 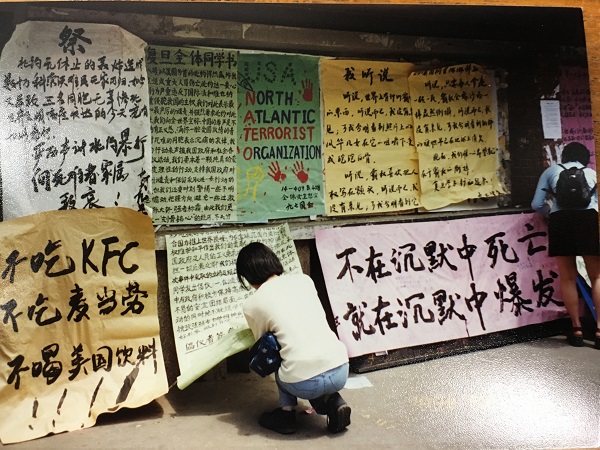 I was not an eyewitness to China’s 1989, but learned from accounts by others that the KFC near Tiananmen Square sometimes served as a meeting point for participants in that important struggle. This led to a curious case of cultural miscommunication when Chai Ling, a leader of the 1989 protests, came to speak at the University of Kentucky in 1991, as part of an event commemorating the movement. Seeking to connect with the students and faculty of the school, where I was teaching, she brought up a key meeting held at a Kentucky Fried Chicken outlet, assuming that the crowd would take pride in the state’s name being connected to efforts to make China freer. It was a natural assumption, but it was one part of her speech that fell flag, since many professors were from places other than Kentucky and some looked down on fast food franchises of all kinds, while more than a few people with ties to the state didn’t view KFC as a positive representative of it. 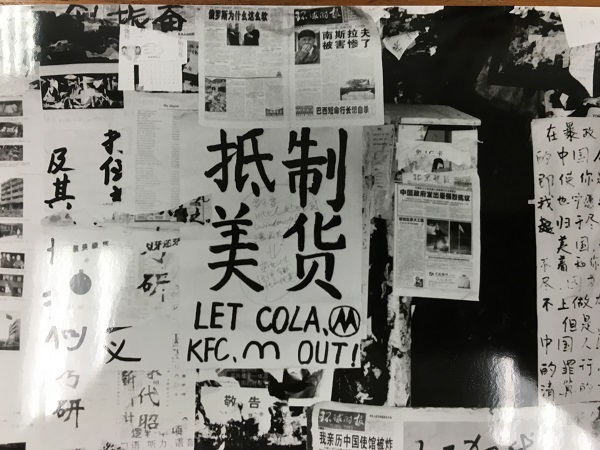 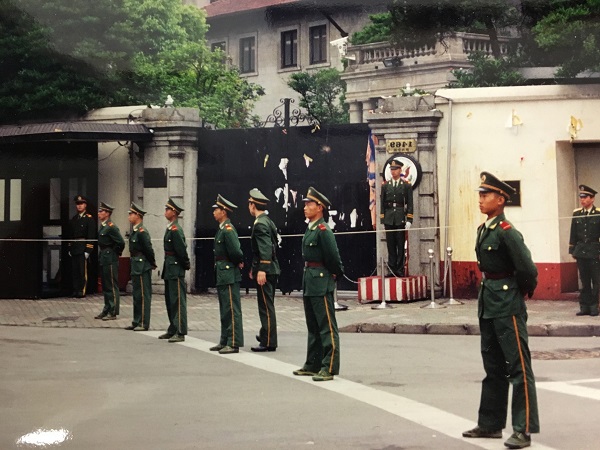 My last comment concerns my experiences taking photographs in 1999. Fascinated by the call to boycott McDonalds and KFC, as well as being interested in how popular those places had become in China during the final years of the last century, I spent some time checking out the branches of both to see how they were faring in the wake of the Belgrade bombing. Within days of the first boycott calls, lots of people were back to getting their fried chicken and Big Macs in the usual way. What sticks in my mind most about visiting the franchises, though, was that when I took out my camera to take photos of crowds and also of the décor inside them, as I’ve always been interested in the strategies global brands make to adapt to local tastes and traditions, I got hassled more by security personnel than I had been the previous days on campuses. It turned out to be easier for me to take photos of protesters rallying to the cry of “Down with American-led NATO Hegemonism” (one of the movement’s main slogans, which doesn’t roll off the tongue in any language) than of the interiors of establishments seen as important symbols of U.S. capitalism. 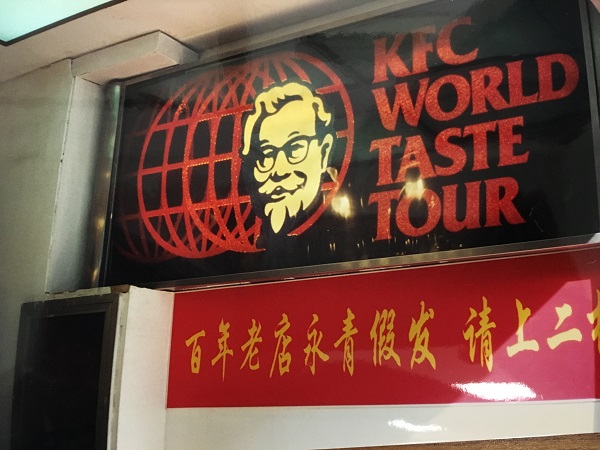