Retirement from her post as the Curator of Chinese Collections at the British Library in London seemingly hasn’t done much to slow down Frances Wood’s output. She’s never been anything less than prodigious, and she has now assembled a collection of writing from China, going as far as 1,000 BCE and the anonymous Book of Songs (Shi jing) and finally finishing with Dai Houying’s Stones of the Wall (1981), which set during the Cultural Revolution. Titled Great Books of China: From Ancient Times to the Present (published by BlueBridge in the U.S. and Head of Zeus in the U.K.), her latest work contains over 60 excerpts, presented in rough chronological order, from novels, poems and philosophical works, each introduced by Wood to set them in context and explain their importance. The collection is at once a serious study of the progression of Chinese writing for the scholar and, for those less scholarly inclined, a fine miscellany to dip into at random given a free hour and a glass of something warming.

Wood began to learn Chinese at Cambridge in the late 1960s and then studied at Peking University in the mid-1970s — an extraordinary time to be a foreign student and fascinatingly recorded in her memoir Hand-Grenade Practice in Peking (2000). She joined the British Library in 1977 as a Junior Curator and eventually became the Curator, serving in that role until her retirement in 2013. Along the way there was an outpouring of books and papers, as well as a deep involvement with the International Dunhuang Project and the Diamond Sutra (the world’s earliest printed book). A large number of Sinologists have benefitted from Frances’s help and knowledge over the years.  Those of us of slightly lesser academic ability also have reason to be grateful to her. Many of my own generation (i.e. now around 50) are deeply indebted to Frances for her comprehensive Blue Guide to China, which became a constant travelling companion at a time when few other guides ventured outside Beijing, Guangzhou or Shanghai. Frances’s Blue Guide was both an informative companion to have along and, so it seemed to me at rather stressful moments (in what are now called tier 3 and 4 cities in corporate speak, but were then just generally “the hinterlands”), a sympathetic one. Her advice was eminently practical. Here, for instance (and I dug out a characteristically well-thumbed copy from the library to check I wasn’t misremembering), are some of her comments:

Always tired, often wet, numb from hard seat train travel or nauseous from a long distance bus ride, never quite sure how horrid the night’s accommodations might be and feeling the pangs of pretty constant hunger, Frances’s Blue Guide was a beacon of hope.  Reading it I felt that, if she had survived all this, then just possibly so might I.

But back to Great Books of China. In her introduction Frances notes that when she joined the British Library in the 1970s, a rule was in place that no translations of literature were to be acquired — readers were expected to be able to, and insist upon, reading the original. So, an obvious first question…

PAUL FRENCH: Did you read all the entries in Great Books of China in the original or sneak peek the odd translation?

FRANCES WOOD: Both. I had to translate a lot myself but I also wanted to make sure that anything I mentioned existed in a complete or partial translation into a European language as it would be cruel to tell people about a ‘great’ book that they would have no chance of reading in any form.

Where does this lifelong interest and fascination with China come from?

At the age of 16 I considered myself a brilliant linguist (French and Spanish) and thought that at university I would like to study a language that was as different and as difficult as possible. I can still hear myself saying “as difficult as possible” which was foolhardy as I am fairly lazy and an accomplished cutter of corners. I chose Chinese for no good reason, rejecting Japanese (in the ’60s still not a great place to be a woman) and Arabic (same reason). As soon as I started learning the language I was fascinated by the difference  — not just grammar, vagueness about tense etc, but the way words and ideas were put together. And in the late ’60s when China was closed down in the Cultural Revolution, language seemed the best way to understand the culture.

You’ve never shied away from the “big project” — did Marco Polo really come to China?, a history of China’s treaty ports, a history of the Silk Road — all of it!, a biography of the First Emperor…and now Great Books of China: From Ancient Times to the Present…Are you strangely drawn to incredibly large projects that are guaranteed to have you pulling your hair out half way through?

I don’t really think of them as big projects, just interesting ideas to disentangle. With Marco Polo I wanted to show people that there were amazing sources to explore, from Matthew Paris in the 13th century to the more recent work of the wonderful Herbert Franke and Leonardo Olschki — I really hoped they would look for themselves and make up their own minds. And with the First Emperor, I wanted to challenge the view of him as one of China’s great villains and show the really interesting things that he did, effectively establishing China as we know it. His coinage survived until the early 20th century and the principle of the ‘height’ of legal responsibility, set out in his legal system, persists to this day where children under one metre tall ride free on buses, etc.

The Silk Road is a bit of a nightmare with Sogdians and Tanguts and a tangle of scripts, but it also includes amazing adventure stories which I hoped people would enjoy.

You’re fairly even handed throughout Great Books — the Daode Jing, the Diamond Sutra, the Tang poets, through to the 1930s writers and on to Eileen Chang and even Mao — what was the criteria for selection (and also rejection)?

I did want to make a very broad offering and to include things like garden design handbooks and geographical description (although I find Xu Xiake — the Ming Dynasty travel writer — pretty boring). My bottom line was the availability of some form of translation and a desire to include a great variety of types. I do think that all the unfamiliar names and concepts can be pretty off-putting but I hope that a series of very different essays can combat boredom. I suppose one of my main aims was to try and encourage people to familiarise themselves with Chinese literature — I’ve always been impressed by the popularity of western literature in China — finding a taxi-driver in Shanghai with a well-thumbed copy of Sherlock Holmes to while away his waiting time. And when Wen Jiabao came to the UK and asked to go to Stratford-on-Avon, it was because he was genuinely keen on Shakespeare, having read the brilliant translations that were made in the early ’50s. By contrast, I don’t feel that London’s taxi-drivers and our own great leaders are sufficiently aware of Chinese literature.

You surely can’t personally like all of these thinkers, authors and poets. Who’d make the cut to a personal “Frances Wood favorites” shelf?

It is almost easier for me to say what I don’t like, which would include Confucius, a terrible old fusspot with extremely conservative views even for the Warring States period. Also the great military epics like The Three Kingdoms where I only like the bits where cunning plans are involved. I can’t get on with The Journey to the West — it reminds me a bit of Tolkien who I can’t get on with either.

Favorites would include Strange Stories from the Liao Studio, which also includes a lot of supernatural stories but they are quite funny and mixed in with stories of performing mice and ladies rushing out into the street in their knickers when an earthquake hits. I like The Travels of Lao Can and The Unofficial History of the Grove of Literati because they are quite witty, and things like The Dream of the Red Chamber and Plum in a Golden Vase for the amazing details of life in the Ming and Qing.

What’s next — another summation of 5,000 years of Chinese history, or perhaps something more targeted?

One of the books I chose was Wu Han’s Biography of the First Ming Emperor, which I love — it has its Monty Python aspects but the whole political background is fascinating, from the Ming Emperor himself to the downfall of Wu Han, a terrific historian who dared to make a political statement, thus inadvertently starting the Cultural Revolution. I’d rather like to work on that, and I’m also thinking of dramatizing the Versailles Conference, at least the parts that concern China. And I urgently need to paint the bathroom. 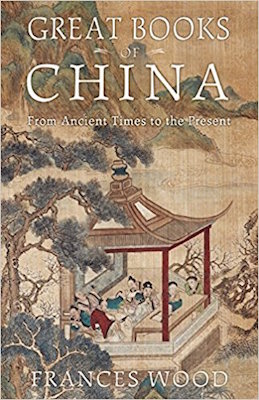