Last year, Weina Dai Randel was virtually unknown. Now she’s causing a stir in literary scenes from the U.S. to China, thanks to the strong reviews venues such as Kirkus, Booklist, Publishers Weekly, and Library Journal have given to her pair of books about Empress Wu: The Moon in the Palace (published in March) and The Empress of Bright Moon (just out this month). There are two unusual things about her series on China’s most famous and infamous pre-modern female ruler.  First, it’s not a traditional trilogy, but rather a duology. And, second, the two works in it were released just a month—rather than a year or two—apart.  There are already deals to translate both into four languages.  Weina, who I met through a writer’s group and sharing a publisher, was born and raised in Wenzhou, a coastal city in Zhejiang province. After working as a journalist and online magazine editor in Shanghai, she moved to Texas at the age of twenty-four. That was fifteen years ago. Now, married and a mother of two, Weina lives with her family in suburban Dallas, where I caught up with her via email to respond to the following series of questions.

SUSAN BLUMBERG-KASON: Can you tell us the philosophy behind writing two books in a series instead of three or more as well as releasing your books just one month apart?

WEINA DAI RANDEL: As far as I know, there is no philosophy behind this! The truth is rather plain: My agent initially negotiated with the editor at Sourcebooks for a trilogy of Empress Wu, but the editor was not sure how American readers would respond to a bulk of novels about a Chinese Empress who was relatively unknown in the U.S. But the editor was also fascinated with the rich life in the second book, so she decided to have two books instead. And she also decided to release them a month apart so readers wouldn’t have to wait too long for the sequel. That’s why there was a duology and why The Moon in the Palace and The Empress of Bright Moon were published a month apart.

You’ve stated in interviews that you wrote your books in response to novels set in China or those that feature Chinese characters in which women are portrayed in depressing terms. You specifically mention Maxine Hong Kingston, an author you were reading in graduate school in Texas. Besides the Empress Wu, which other Chinese women came to mind when you thought of strong females throughout Chinese history?

I can think of the famous Xi Shi, one of the Four Beauties in ancient China, who might also be the first female spy; the infamous Lu Hou of the Han Dynasty; and also the gifted poet Li Qingzhao, whose poetry I really like. But I can tell you, few of the strong women in the Chinese history were described in a positive light and even fewer had a happy ending.

In The Moon in the Palace, you mention that it took ten years to write this novel. Along the way, you’ve had a couple of children. Do you have any tips for juggling research, writing, and parenthood?

When I was taking care of my little ones, I found it very helpful to have a routine and set a structure for the day. For example, dinnertime was always at 5:30pm, then bath time at 6:30pm, then bedtime at 7:30pm. I usually wrote when my kids were taking a nap or sleeping, so I was very firm about putting them down at the precise hour for nap and bedtime. Once they awoke, I did my housework, took them to grocery shopping, parks, and play dates.

I also think it’s important to simplify your life and find serenity in your mind. Being a mother means you’ll have a busy schedule, but having a busy head filled with clogged schedules and activities can be detrimental for a writer. I narrowed my daily priorities to a few things, and I also eliminated social events as they conflicted with my writing hours. I think, like writing, parenting needs consistency and persistence – if you stick to a certain routine everyday, you’ll fall into the rhythm, and the people around you will fall into the rhythm with you.

You didn’t move to the US until you were twenty-four. It’s quite amazing that just fifteen years later you have published two novels in a language that’s not your mother tongue. I know you get asked this question a lot, but how did you decide to write your novels in English and not in Chinese?

The real reason that I decided to write in English is I couldn’t get published in China. I finished my first novel in Chinese when I was twenty-one and pitched it to an editor in Shanghai. He invited me over to the office, talked to me about how competitive it was to publish a novel, and rejected my manuscript. Later, some short stories I wrote were also rejected. Discouraged, I decided there was no future for me in writing Chinese. So I devoted to learning English, which I was also fascinated with.

When I came to the U.S., I spent every morning studying English, making notes, and always had an English-Chinese dictionary in my hands. My education at graduate school really helped me command the language.

After being away from China for a decade, you finally returned at the end of last year, husband and two children in tow. In the acknowledgements in The Moon in the Palace, you write that you can finally go home now that your books are published. Was there a reason you couldn’t go back before then?

So funny you asked that! Yes, there was a reason, and you might think I’m very stubborn! Twelve years ago when I had the idea of writing about Empress Wu, I told my friends in China about my ambition, and they were so surprised. “In English?” they asked me over the phone, and even though they were seven thousand miles away, I could tell the disbelief in their voices. My parents were not so subtle. My mom, a traditional Chinese woman, told me flatly to forget about writing and start having kids (I had not had kids yet).

You see, I was a person of pride, and it was hard to digest those discouraging comments and especially hard to hear that I was no good at anything other than producing babies. And the pressure continued to mount each time I talked to them. First, they would ask me, “When are you coming back to China?” After that, question would follow, “So are you still writing?” They meant well, I knew that, but I also knew they did not believe that I, a Chinese who was born and raised in China, could write a novel in English. So I silently made it a bet: I would return to China when my books were published; otherwise, I would not go back.

For twelve years, I resisted the urge to visit them and declined my kids’ requests to meet my family. When my novels were finally set to publish, I returned to visit my friends and family. 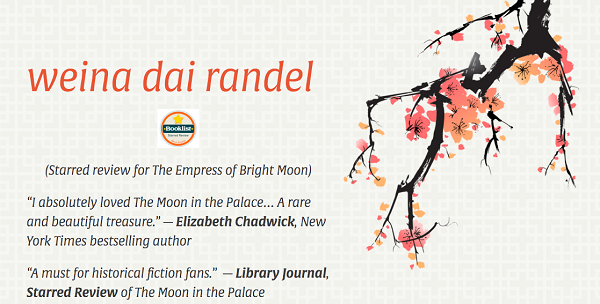