It is March in Beijing. Many local friends tell me that it is the loveliest month here, as one can see, smell, and feel the change of seasons coming after a long smoggy winter: The day is warm and the golden sunlight streams brilliantly on a blue sky — so blue that it seems as if it had been washed by the Dragon King, the deity for water and weather in Chinese folk beliefs. Plum and apricot blossoms and willows glow with life. Indeed, the divide between all the four seasons is more distinct here in the north than in Jiangnan, the southern region by the Yangtze River where I grew up, echoing loudly the 24 solar terms. After the Rain Water (yushui 雨水) reaches Equinox, then it arrives Clear and Bright (qingming 清明), the day when people sweep the graves of their ancestors. Ancient solar terms such as these figure centrally in Ian Johnson’s new book, Souls of China, which includes sections named for them, one of the first things that intrigued me about his approach to the topic of the revival of religion in the PRC.

TING GUO: This is really a fascinating book. I particularly enjoyed how each chapter corresponds with a seasonal note, a beautiful way to weave the threads together. Did you choose certain religions to go with certain seasons? Was this done intentionally or did it simply reflect the chronological order of the events you wanted to recount?

IAN JOHNSON: It was done intentionally. In a way it has that sense of “returning” (to tradition and one’s roots), which is also the focus of my book. The book happens chronologically so the events fit into the seasons naturally. But I chose the solar terms based on their symbolic value. So jingzhe, or Awakening of the Insects, has chapters on politics awakening, and ideas awakening among people. Qingming has chapters on death and rebirth, and so on. All of the chapters take place in one year — so in real time — except for one chapter, which took place the year before. I explain this in the endnotes, which detail exactly when the interviews were conducted.

You provide readers with a religious landscape of China, taking them by turns to different regions. But some important places are missing from your map. As a Southerner, for instance, I felt that Jiangnan — a region with major cosmopolitan cities like Shanghai and home to Zhejiang province, a place that has seen a religious boom — was skipped over.

I don’t exactly agree. I specifically put in a large section on Jiangnan. The Master Nan chapter is set there, as are key parts of the chapters on internal cultivation. But I take your point — there isn’t much on areas like Fujian or Guangzhou, which have important and vibrant religious traditions. I was faced with a quandary: a book about a huge country has to be selective in order to be coherent. A survey of China would be a different kind of book. Any book involves a series of choices and this was no different. When it comes to books about religion in China, many people in the West would expect to see chapters on Tibet and Xinjiang, but I focus on Han Chinese. This explains why I don’t include deal with Islam, despite a strong interest in that religion that shows through in my other writings, from a previous book, A Mosque in Munich, to interviews I’ve published with scholars working on Chinese Muslims, such as Matthew Erie, and pieces I’ve done on recent books about Xinjiang. I also selected aspects of religions that I thought were more indicative of China’s future development. So I don’t write too much about Wenzhou and “boss Christians,” who are successful business people with large churches, because I think they are specific to a region and a model that is dying out.

You write the following: “This [the religious revival] is different from what we saw in previous decades. Throughout the decades of Communist rule, the country has had dissidents, including inspiring figures such as the Nobel peace prize laureate Liu Xiaobo. But by and large these activists and their pursuit of universal rights left ordinary people cold. Many saw them as well-meaning but unpragmatic.” In what way are the religious leaders or practitioners you have in mind different and more pragmatic than previous activists? I understand the spiritual movements are more profound and deeper, but what kind of systematic critiques or constructive actions can faith offer that perhaps previous movements and thoughts could not?

I wasn’t trying to give a prediction, so I kept this part quite short, only a few pages. I think that religion can provide a set of values that are higher than any one party or ideology. At the same time, it’s hard to read dissidents’ works, but religious works are mostly not banned (as long as they are from the state-sanctioned religious organizations).

I also noticed that those religious leaders are mostly patriarchs of their organizations and groups … What about the role of females?

Yes, many of them are men, which reflects society’s patriarchal nature. I discussed this in the chapter on Almighty God, which has a strong female role, and speculate that this might be part of the reason for the group’s popularity. I thought a lot about how to put more female characters in the book and considered adding a nun, who actually has had the most influence on my research. I wrote a profile about her for the New York Times Magazine, but in the end I left her out of this book because I intend to write a book dedicated to her.

I really liked how you end some chapters and sections with a poem, with some spiritual spaces for the reader to ponder. For instance, when you were meeting Master Nan Huaijin he recited a poem and explained “It’s about something that cannot be recovered” — that was deep!

I translated that poem myself, but when he told it to me I didn’t get his meaning until he explained what he meant!

I have one final question, which has relevance for your previous work on other topics as well, such as the reporting that served as the basis for Wild Grass: Three Stories of Change in Modern China: are there advantages as well as disadvantages in being treated as an outsider, recognized as a foreigner when conducting fieldwork?

There are many disadvantages. Sometimes it is hard to blend in. In some places, for instance in Henan, even if I cover myself completely, I’ll still be spotted as a foreigner and an outsider. But there may be advantages as well, in people being more patient with me, or simply excited that someone from outside their world is interested in their stories. One overwhelming feeling I had was that Chinese people wanted the outside world to understand their lives and so were incredibly patient and generous with me.

Editors’ Note: While this interview with journalist Ian Johnson, which focuses on his forthcoming The Souls of China: The Return of Religion After Mao, was being conducted late in March, word came that he will be this year’s recipient of the prestigious Shorenstein Journalism Award. The book will be released on April 11, and on that day, Johnson, who usually divides his time between Beijing in Berlin, will be in Harvard to give a talk about its themes. That will be the first in a series of speaking events that will end with him receiving his prize at Stanford and taking part in panels in various parts of Northern California. 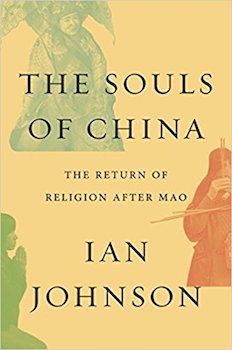