It is an unfortunate axiom of publishing in China that the best way for your book to gain international attention is to have the Chinese government make it unavailable to domestic readers. Such is the fate of Out of Imperial Autocracy (Zouchu dizhi), the latest book by the eminent public intellectual and economic historian Qin Hui, published earlier this year.

International coverage of the ban has focused on the book’s treatment of constitutionalism in modern Chinese history. It is a timely topic. The question of whether the Chinese Communist Party should be subject to the Constitution of the People’s Republic of China has become a third rail for writers and academics in the Xi Jinping era. The banning of the book so close to the government-promoted “Constitution Day” holiday, as well as the recent trial of free speech advocate Pu Zhiqiang, have put China’s constitution in the spotlight. But while Qin Hui does discuss constitutionalism, he does so in the context of a much larger and wider-ranging assessment of the political transformations in China from the late-19th into the early-20th centuries.

Out of Imperial Autocracy is a collection of essays on modern history, many of which appeared previously in mainstream publications in China on the occasion of recent centennials: The 1911 Revolution, the outbreak of World War I (1914), and the beginnings of the New Culture Movement (1915). Articles on the Taiping Rebellion and Sino-Japanese relations round out the collection. The result is nothing less than an overview of Chinese modern history by one of China’s most celebrated intellectuals and gifted polymaths.

Given the wide range of topics reconsidered, Qin Hui’s perspectives on constitutionalism may not be as objectionable from the point of view of government censors as some of the other positions taken in the book. What is interesting is why these arguments are now sufficiently controversial to have the book removed from the shelves when most had already been published in one form or another.

In recent years, China’s leaders have made it clear that they are in an all-out ideological war against the intrusion of Western values into the Chinese political system. The banning of Qin Hui’s book, and the continuing pressure on academics in China, is evidence that the government is not only looking out for views that radically depart from party orthodoxy, but is now no longer willing to tolerate any view that does not seamlessly fit with set narratives on a range of issues, among them history. In the past year, there has been a concerted campaign by Party publications and officials attacking “historical nihilism,” defined broadly as, “anything that challenges the historical orthodox that depicts the Party as the decisive force in the Chinese people’s struggle for independence and liberation from suppression.” As the party continues to rebrand old ideological terms, think of it as Anti-Revisionism 2.0.

Space does not permit looking in depth at all of the argument presented in this collection, but a few topics have attracted particular attention in the press and by reviewers.

If one thread can be traced throughout the collection, it is the question of how to proceed away from the imperial autocratic system and toward a republic in the early 20th century. Qin Hui argues that in Chinese history, there have been only two significant political transformations. The first was the move from the feudalism of the Zhou Period (1122-256 BCE) to the autocracy of the state of Qin (256 BCE-220 BCE), which marked the beginning of the imperial system. The second was in 1911, when a Republican revolution swept the Qing Dynasty from power and brought that same system to an end after nearly 2000 years.

The first transformation, from Zhou to Qin, lasted nearly 100 years. For Qin Hui, there is little coincidence that China today remains caught in the grip of the equally momentous second transformation that began just over a century ago.

Qin Hui concedes that the the 1911 transition out of autocracy did not fulfill the ideals of the revolutionaries insofar as a constitutional government failed to take hold in China. But was it a total loss? Viewed in demographic terms, the revolution avoided the calamitous population drops of early dynastic transitions. In the realm of foreign affairs, between 1911 and 1945, China went from being under the thumb of foreign treaties to a member of the UN Security Council. Surely, Qin Hui argues, that must count for something?

In fact, in one of the more controversial sections, Qin Hui argues that when the Chinese people famously “stood up” with Mao Zedong in 1949, it was not against foreign imperialism, as later PRC interpretations have emphasized. Instead, he contends, the people were taking a collective stance against the Nationalist government of Chiang Kai-shek. The Communists promised a system more in keeping with the ideals of the 1911 revolution, a move away from autocracy of the Nationalists and the corruption associated with their one-party rule. The appeal of the Communists, ironically, was the fulfillment of a 30-year dream of democracy.

Looking back then, the political fate of the 1911 revolution was not predetermined by cultural or historical circumstance. In today’s revolution-averse ideological climate, many scholars argue the revolution failed because it tried to do too much, too fast. Qin Hui feels that gradual reforms were unlikely to dislodge imperial autocracy; he argues that constitutional monarchies develop out of feudalism, as in the case of the British parliamentary system or the Meiji Restoration in Japan. Entrenched autocracies, such as those found in Russia and China, require revolutions. But are revolutions any more radical than reforms or political evolution? Perhaps not, answers Qin Hui. The 1911 Revolution was relatively bloodless by the standards of Chinese history and world revolutions, while the founding of a constitutional monarchy in Japan resulted in bloody civil wars and ultimately led to an aggressive militarist state.

Qin Hui can find autocracy and Legalism lurking everywhere. It can even bring together strange bedfellows in modern Chinese history, like the pseudo-Christian rebels of the Taiping kingdom, whom Qin Hui sees as carrying on the anti-intellectualism of the Qin period, and the vehemently anti-Christian pro-regime insurgents of the Boxer Uprising, who were rebels in support of the imperial order.

Systems matter. The transitions of Chinese history, whether from Zhou to Qin two millennia ago or out of autocracy in 1911, succeeded or failed based on the suitability of the systems for that historical moment.

Qin Hui focuses on systems because in his estimation systems can be judged as being either superior or inferior, whereas cultures, whether comparing ancient and modern or Eastern and Western, cannot be judged the same way. As he explains,

You may play basketball, and I may play ping-pong. The sports themselves cannot be defined good or bad. We cannot say that basketball or ping-pong is superior to the other. But the rules of the game can be judged good or bad. If in the rules of a sport, only one side gets to serve, or the referees may also participate as players, or if one team is allowed six players and the other team only three, no matter if we are playing basketball or ping-pong, then we must hold these rules to be of poor quality.

The Chinese Communist Party considers itself locked in an existential ideological struggle with the West. It regards even the idea of universal values as anathema to its own ideological survival. As a bulwark against these attacks, party ideologues have deployed shields of cultural and national exceptionalism. Their argument is that China exists as it is because that’s the way it was meant to be. Qin Hui’s separation of culture and systems knocks against the very foundations of this tautology.

While such arguments do not have the sex appeal of a scholar calling openly for the Party to submit to constitutional rule, the ability to disrupt entrenched historical narratives presents just as grave an ideological challenge. In China, history is taught as a set of facts. The answer is “A” or “B.” The idea that history can be composed of multiple — and often competing and contradictory — perspectives counter to the CCP’s attempts to control public opinion.

While copies of Out of Imperial Autocracy are still to be found by laboriously browsing through China’s e-commerce platforms (searches for the book by title invariable come up empty or say the book is out of stock), Qin Hui and his publishers have confirmed that the book is banned for now. Qin Hui has a way of simplifying complex narratives while complicating seemingly simple assumptions. Hopefully his book, a tour-de-force by one of China’s most intelligent, engaging and challenging intellectuals, gets the readership it deserves. 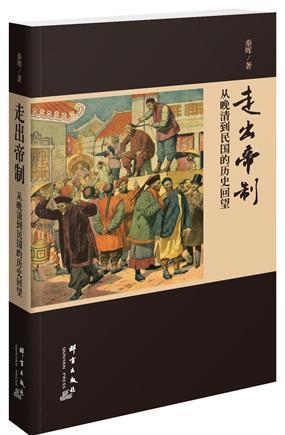