I recently joined with three other “China Blog” contributors to compile a list of 12 gift suggestions for readers seeking books to give China-savvy or China-curious friends and family members.  This is a sequel inspired in part by how tough I found it to limit myself to just the trio of titles we were each allotted, and in part by the thought that it might be useful to give those same readers some ideas on how to use Amazon gift cards or holiday checks to expand their own libraries of books on China.  Even limiting myself to 12 titles proved tough, so I imposed a few arbitrary rules of selection: no repeats from the other list, only works written in English and published in 2013, and only accessibly written titles – so scholarly ones could make the cut, but not if clearly intended just for specialists.  I also ruled out books about China’s future, since I tend to avoid these (sci-fi novels excepted), although one recent prognosticating work, In Line Behind a Billion People: How Scarcity Will Define China’s Ascent in the Next Decade, while not making it onto this recommended list, has managed to slip onto my personal to-read one.  I’ve grouped the books into six pairs:

1) Emma Oxford’s At Least We Lived: The Unlikely Adventures of an English Couple in World War II China offers a well crafted account of the author’s parents’ experiences in Hong Kong, from which her father made a dramatic escape as Japanese forces took control, and Chongqing, where her adventurous mother journeyed to work while in her mid-twenties.  It tells a story of love in the midst of battles and air raids, drawing heavily on the author’s access to family letters.

2) Tobie Meyer-Fong’s What Remains: Coming to Terms with Civil War in 19th Century China provides a poignant look at the aftermath and memories of the violence associated with the Taiping Uprising (1848-1864) and its suppression.  Just out in paperback, its virtues were described well in “The World’s Bloodiest Civil War,” a review essay published in this publication last May.

Two if by Sea

1) Timothy Brook’s Mr. Selden’s Map of China: Decoding the Secrets of a Vanished Cartographer is a short, complex book by an erudite scholar with an elegant writing style, whose narrative moves from efforts made by Chinese border guards to keep him from taking a seemingly ordinary map out of China in the 1970s to his much later efforts to unravel the mysteries of the very old eponymous cartographic creation recently discovered in an Oxford library.  Of topical interest is the book’s discussion of Pacific islands that different nations claim as their own.

2) David Igler’s The Great Ocean: Pacific Worlds from Captain Cook to the Gold Rush is an ambitious and richly detailed look at the way travel and trade via the sea connected the United States and China, as well as the neighbors of each and the islands in between them, from the mid-to-late 1700s to the mid-1800s.  Not a China book per se (and full disclosure: by a UC Irvine colleague), but one with much to offer those fascinated by any or all of the countries that ring the Pacific, and an important part of a new surge of work on that ocean, as David Armitage shows in the essay “From guano to Guantamo,” a TLS cover story focusing on Igler’s book and a related one by Gregory T. Cushman.

1) Henrietta Harrison’s The Missionary’s Curse and Other Tales from a Chinese Catholic Village weaves together three centuries of stories from and about a small community in North China, deftly paying attention to local, imperial and later national, and even global forces and factors.  The author makes use of everything from Vatican archives to interviews with North China villagers, as she brings to life the ways that imported and indigenous beliefs and practices became entwined in a village that has been both Chinese and Catholic now for many generations.

2) Sherman Cochran and Andrew Hsieh’s The Lius of Shanghai makes extensive and effective use of a large cache of letters that were exchanged between members of a prominent Chinese business family.  It is another work, like the last one, which is tightly focused in one sense yet expansive in another, in this case due to how robustly cosmopolitan Shanghai was in the early 1900s, when many of the letters were written, and the fact that the family’s members left the city to spend time in other parts of China and also in the West.

China from the Bottom Up

1) Peter Hessler’s Strange Stones: Dispatches from East and West is a sort of bonus book for fans of this extraordinary writer, who finished a celebrated trilogy on China and then moved, first to Colorado and then to Cairo. This collection, which is made up of previously published, albeit reworked, material is not exactly something that turns his China oeuvre into a quartet, since it also deals with other places (Nepal, Japan, the United States), but with this special a writer, we will all happily take what we can get, and the book is a wonderful read for all the reasons I spelled out in the review of it I did for the Atlantic’s website.

2) Perry Link, Richard P. Madsen, and Paul G. Pickowicz’s Restless China is the third in a series of edited volumes that shares with all of Hessler’s works on Chinese themes a focus on how ordinary people in that country are living through and helping to shape extraordinary times.  My personal favorites of its many fine chapters are ones that look, in turn, at the writer (and racecar driver) Han Han, a female folk healer, and the fun that online commentators have with coded terms and word play, but for more about the book’s contents and qualities, see “Jittery Nation,” a savvy review of it that my Asia Section co-editor Megan Shank did for this publication.

1) Qiu Xiaolong’s Enigma of China: An Inspector Chen Novel finds the poetry-writing Shanghai detective back in action in the same morally murky milieu that has featured in so many of the previous installments of the series.  As usual, the Shanghai-born though now St. Louis-based author’s greatest strength lies less in his plotting than in his skill at evoking the feel of daily life and political tensions in his native city, and his knack for finding interesting ways to connect crimes to topical concerns, which in this case includes the shifting political and cultural role of the Internet in China.

2) Jason Q. Ng’s Blocked on Weibo: What Gets Suppressed on China’s Version of Twitter (and Why) is a book whose pleasures and smarts I have already written about in not just one but two places, having penned a brief review of it for the TLS and discussed it as well in a commentary on the complex nature of Chinese censorship systems I did for Dissent magazine.  The TLS review is behind a pay wall, so I won’t link to it here, but I will point readers interested in details about the book to look up the Dissent essay that’s freely available online.

1) Peh Shing Huei’s When the Party Ends: China’s Leaps and Stumbles After the Olympics surveys major Chinese events from the spectacles of the 2008 Beijing Games and the 2010 Shanghai Expo to the Bo Xilai scandal and the rise of Xi Jinping.  It should appeal to readers fascinated by elite politics and its author, who did good reporting from Beijing for the Singapore Straits Times before moving back to Southeast Asia, knows when and how to enliven top-down views of China with human interest stories and engaging personal touches.

2) Rowan Callick’s The Party Forever: Inside China’s Modern Communist Elite covers much of the same ground and has many of the same strengths as the last book, though it is less interested in Chinese mega-events (the “Party” in Peh’s title refers in part to the 2008 and 2010 spectacles) than in the Leninist organization that continues to run the country (“Party” in this work’s name just refers to that ruling group).  For American readers, who are most often exposed to works by journalists who come to China with ideas about it shaped by their having learned about it first while living or studying in the United States or the U.K., one thing that both of these final titles offers, since Callick is based in Australia and spent a long stint covering Beijing for the Australian, is an alternative perspective on Chinese affairs, influenced by viewing the topic from a different geographical and geopolitical vantage point. 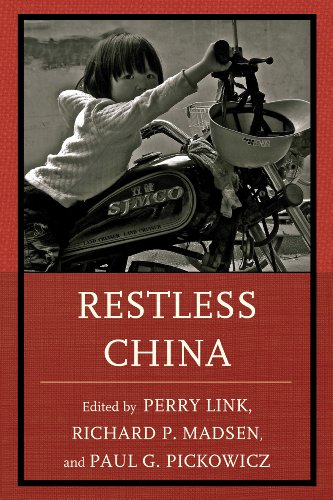