I’ve had the pleasure of participating in the Hong Kong International Festival in two past years, 2009 and 2015, and found doing so both times memorable. I am happy, therefore, to be heading off soon to be part of the next one, which runs from November 4 to November 13. My past festival activities have ranged from a dialog with Global Voices co-founder Rebecca MacKinnon on the perils and pleasures of “blogging”—back in the late 2000s when that term was only starting to be widely known, hence sometimes needed to be put in quotes—to a presentation eleven months ago, which I’ve written about for this site before, reflecting on the Umbrella Movement’s legacy one year on.

This year, I’m lucky enough to be doing two events with editors and writers I admire: a November 6 public conversation with Time magazine’s Zoher Abdoolcarim on how Hong Kong and mainland cities have changed over the last three decade, and a November 7 two-man show on travel writing with LARB’s founder Tom Lutz, which will take place at the United World College and be part of the Festival’s Schools Programme.  (Tom will also be doing a main program event: a session fittingly titled “Well Read,” in which he will compare notes on recent books with editor of the Hong Kong Review of Books–and past China Blog contributor–Alfie Bown.)  I’ll also be going to some sessions just to listen, but rather than say anything more about what will be happening in Hong Kong, I’ll let you hear about it from the main force behind the event, Festival Manager Phillipa Milne, who agreed to answer some questions via email.

What are some of the things happening this year that you think might be of particular interest to readers of the China Blog, given the authors and books involved?

We are thrilled to welcome Bei Dao, one of China’s most important contemporary writers and leader of the Misty Poets. We have two events exploring the art of translation with Sheng Keyi, author of Northern Girls and Death Fugue, and translators Shelly Bryant and Jennifer Feeley.  On the non-fiction side, Frank Dikötter discusses his book on the Cultural Revolution, which completes a trilogy on China during the Mao years, and Beijing-based writer Alec Ash joins us to talk about his critically acclaimed new release Wish Lanterns. This year PEN America will examine its report on the Causeway Bay Bookstore Incident and PEN Hong Kong launches to discuss its missions, goals and concerns over the deteriorating freedom of expression in Hong Kong.

Looking beyond events with ties to Hong Kong or the mainland, what are one or two panels that you feel particularly excited about?  Any authors you feel it was a real coup to get to agree to come this year?

I’m excited about our North Korean events and I was delighted when defector-turned-writer Hyeonseo Lee accepted our invitation to this year’s Festival. Lee’s memoir, The Girl with Seven Names, is an incredible journey detailing her escape from the DPRK.  We also have one of my favorite contemporary writers joining us: Hanya Yanagihara. Yanagihara’s A Little Life was a highlight for me of 2015 – a deeply moving and powerful novel that I can’t recommend enough.

Changing gears, how exactly did you end up running a literary festival in Hong Kong?

I moved to Hong Kong from London in 2014. Prior to moving I worked for City of London Festival, in the programming and education team. Like HKILF it was a small charity, doing great things with limited funding. After I arrived in Hong Kong I was fortunate enough to meet Tisa Ho – Tisa is the Director of the Hong Kong Arts Festival and on the board of HKILF. A position here came up and before I knew it I was starting my dream job!

What have you found most challenging and what most rewarding about the job?

There’s a core team of three, plus our wonderful interns, working really hard to produce a world-class festival, but it’s never easy for small charities operating on small budgets. I’m lucky in that my colleagues are dedicated and passionate about the work we do. This year I decided to reduce ticket prices considerably. As a result there has been a big rise in audience numbers with many events selling out and lots more students signing up. Seeing Hong Kong’s reading community come together to debate and share ideas is a wonderful feeling!

Letting your imagination run wild, what would your dream panel be for a future festival?

Since it’s my dream panel, I have to pick some of my all-time favorite writers! I’ll go for: Haruki Murakami, Margaret Atwood, David Mitchell and Ha Jin. What an event that would be…2017, perhaps?

That would indeed be quite an event!  Thanks for your time.  See you soon. 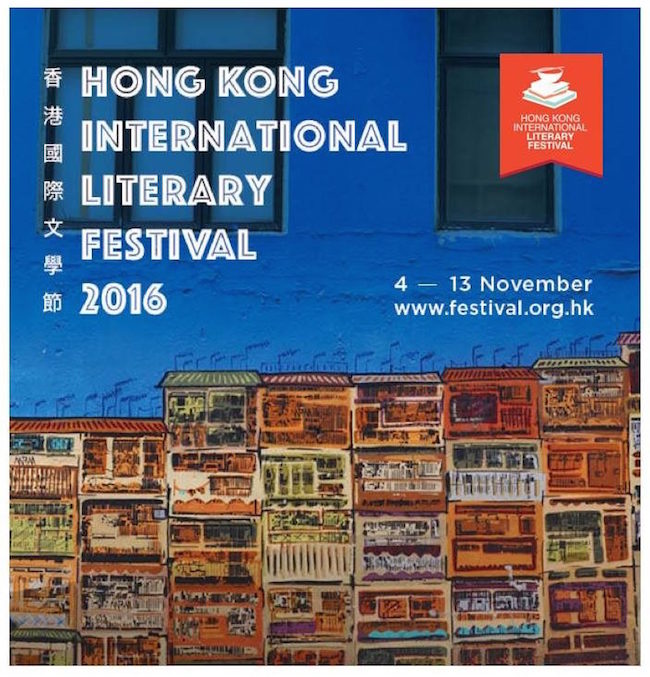