7 a.m., the flat’s buzzer jolts us with two prolonged bursts. My first insane thought: oh my god, I’m hiding a Jew in my apartment! — and (of course) maybe it’s me! Bleary, I open the door. The stern Frau Hausemeister is standing at the threshold. We are here for the curtains, she says. What. It’s not a question. She repeats herself, we are cleaning the curtains today. Two large men in blue work overalls boom out a Morgen! and set up their ladders at the windows. We will bring them back at noon, she says.

After breakfast, Joseph tells me he’s going to stay in a hostel tonight. How come, I say, you don’t like officious Germans banging on the door at 7 a.m.? He smiles, he doesn’t laugh. He is planning to go to some Kaffeeklatsches he keeps up with in Berlin, where he can meet more people. He doesn’t know how late he’ll be; maybe he’ll meet a woman. We head out together. Where you off to now, I say. Joseph is going to visit the Berlin Wall, or what’s left of it. I’ve never seen it before, he says. No figurative curtain, the Wall was an ideological and deadly concrete border, turned over time into a work of anonymous protest art. Have a ball, I say. We make an arrangement to meet later that afternoon should I have any follow up questions for him.

Another rainy night. I take the U-bahn into Pernzlauer Berg, to find the home of Jalda Rebling and Anna Adam, two Berlin-based artists who are also leaders in the Jewish renewal movement here — Jalda, a cantor for the Ohel Hachidusch community, and Anna, a painter and installation artist who works on interfaith community-building, specifically with Muslim kids. They live on the street named after the Gesthemaniekirche (or church), which marks an important location for the peaceful demonstrations that lead to the Mauerfall. The church itself was a refuge and place of vigil for demonstrators trying to escape police crackdowns along nearby Schönhauser Allee. It was also home to one of the few congregations explicitly open to lesbian groups. Jalda and Anna begin the conversation, as so many do, I find, by looking out the window and describing the significance of a specific location in plain view. The conversation in their home — another enviable high-ceilinged flat full of books and music, and the warmth that comes with over thirty years of domesticity — starts with that year, 1989, and moves forward.

The idea of German reunification was scary for a lot of Jews here in the late 1980’s — it was a unified Germany, after all, that lead to the Holocaust. Jalda, one of the founders of Ohel Hachidusch, and its cantor (one of the few ordained female cantors in Germany), came to East Berlin from Amsterdam at the age of 2, with her family — her parents eagerly joined the effort to build a socialist society devoted to peace. Jalda and Anna both belong to that first generation of children of Holocaust survivors. Jalda’s mother, who survived Bergen Belsen to become a well known actress and singer, rode the same train car to the concentration camp as Anne Frank. She was the one later to tell Otto Frank that his daughter was dead.

But we were never afraid, says Jalda, speaking of herself and Anna about the inexorable political and social forces that lead to reunification. We were open about being Jews. And we trusted our neighbors. (It’s very important, she says, that you know who your neighbors are.) We were not sure about the possibility of violence that might result from reunification, and what this might mean for Jews here. But it never materialized as had been imagined in paranoid fantasies. Yet fears persist around us, says Jalda. When the Gaza war started [between Israel and Palestine], Jews in Berlin bought pepper spray to protect themselves from attackers. It became an atmosphere in which every Arab appeared dangerous.  Jalda expresses her perturbation: “Wait a minute,” I would say, “we have Muslim friends.” But those who are scared don’t want to hear it, she says. Jalda and Anna, who are now what they call Bubbes (grandmas) speak with calm subdued voices steady in their deliberate thoughtfulness. One feels their grounded strength. If you are looking for anti-Semitism, says Jalda, it is always there, it will always be there. She tells the joke about the Jewish father of a child who wants to be a violinist. The violin teacher eventually makes his judgment. “Your son plays the violin like a piano,” he says to the father, “he will never be a violinist.” Says the father to the son as they’re walking out the door, “Another anti-Semite!'” We laugh.

Anna describes one of her main interfaith efforts, the Happy Hippy Jew Bus, an actual small bus that travels around Germany, stopping at street fairs and other locations to teach people about Judaism through performance, dialog, and hands-on arts & crafts. Anna’s quiet firm voice has a liquid softness at its center that’s mesmerizing — I can easily imagine her holding people’s attention, especially children’s attention, with her voice alone. She tells the story of how Ibrahim, a Muslim mechanic she knows, helped her when the bus died, by finding a new bus through his uncle, even going so far as to secure new plates for it, with the number BJ1967. “1968,” he said [the pivotal year in German history when the left-leaning younger generation protested against the entrenchment of Nazis in German society] “was sold out; but 1967 seemed close enough.” It was a great story. But when a local Jewish journalist wrote about it, he emphasized that the Muslim mechanic was insinuating a protest against Israel: 1967 is the year of the Six-Day War. When Anna read that, she approached Ibrahim. His response: “The Six-Day War, what is that?” He read the story. “Anna,” he said, “you and I are here to live in peace. But Anna, why can’t the Germans learn to clean their own dishes?” They laughed. You talk about the devil, says Anna to me, and he will show up. The work, she continues, is to dispel the clichés about Judaism. Another story: I discovered, she says, the power of satire. I was on the metro and a young Muslim woman was surrounded by three neo-Nazi guys who were harassing her. I didn’t know what to do, but I knew I had to do something. Then I saw one of them was wearing Levi jeans. And I screwed up my courage and yelled, “Awwww, that guy is wearing Jewish jeans! Look, Levi, a Jewish name! He is a traitor to Germany, wearing Jewish jeans!” The other two turned on him, she says, and started beating him. The three of us chuckle and pour some tea.

So many more Germans are supporting the refugees, says Jalda, than are against their coming. Last winter I was in Israel, and the Israeli press was reporting the nationalistic xenophobic demonstrations in Dresden, but the anti-demonstrations were much bigger. But US and Israeli media weren’t reporting those. And all the refugees who had come months earlier, she continues, were receiving so much help — the media didn’t report it until the political right set the shelters on fire. But that’s not the atmosphere here, she says. Here are people who feel we have to help. Nobody knows how to solve the situation. In a way, the third world war is already going on. Will it lead to the building of a new wall, a new curtain, she asks. All I know, she answers herself, is that now we have to help these people. The Berlin bureaucracy is crazy, she says, we don’t have words for it. I mean, writing numbers in pen on people’s arms? [This was actually happening in September, but discontinued.] I ask Jalda and Anna if the new spike in xenophobia is the expression of feelings that have always existed, or those born from the crisis for the first time. It was always open, says Jalda, but the media was not in the habit of reporting it. The biggest demos, says Anna, are in Dresden and places in the East where there have never been many strangers.

What kind of pressure do you think so many Muslims coming into Germany will place on the Jewish community, I say. They are afraid of something they don’t know, says Anna. We are survivor’s children, says Jalda, and we have taught our children. There is a survival gene; if you have it, you move in the world as it. If we Jews want to be tolerated, then we must tolerate. I work with refugee kids, says Anna, they’ll all figure out I’m Jewish; but I can’t talk about my religion — that’s the law in Germany, everything must be totally neutral. But these people I’m helping will know they are getting help from a Jew. Anna then tells the story of a Muslim girl she knows whose parents have passed on the pernicious blood libel of literally vampiric Jews. When they need help filling out government papers, Anna agrees to lend a hand and takes the opportunity to make fun of the ludicrous, vicious fiction of the blood libel. “You see,” she tells them, “I am helping you, and I am also not sucking your blood.” She makes comical biting gestures with her teeth. The struggle, she says, is to dispel ignorance with the flash of perception: humanity, equality, charity. We can only create a society together, says Anna. It has been a struggle for us to become proud German Jews, says Jalda, but that is where the beginning is for us, and we choose to stay here. We are making something of it. 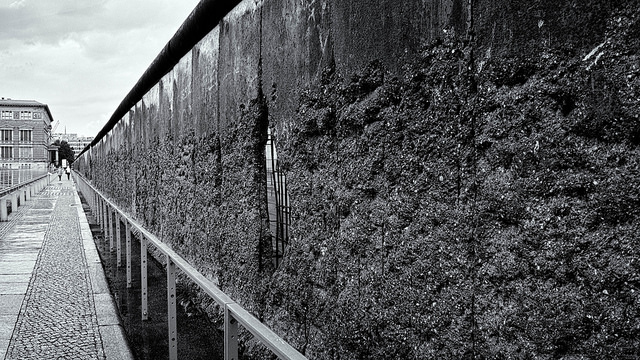