The taxi is waiting for me in early morning dark. I’m on my way home. It feels like it will be a dry day in Berlin after two solid weeks of light rain. The driver and I begin in German, but he’s from Thailand, I discover; he shifts into English. He’s been living in Berlin for the last 26 years.

Where are the refugees, I ask him. They’re everywhere, he says, a big problem. Yes, but in Berlin, I say, where are they. Oh, you can find them at Lageso and at Bundes Allee, he says, do you know where that is? Yes, I say, what do you think of the situation, should Germany be letting them in? Germany has opened its arms, he says, and it is a nation that keeps its word. The refugees that come here need to learn the language and become German. They need to stay, not just come for some years and leave. But the problem is (he speaks English slowly and carefully, making sure to articulate every syllable fully) that there are some who come and they are jihad, they are being paid to come over here, to bring the war here. Who do you think is paying them, I say. He shrugs. (Did I miss an issue of Time magazine or something; is this on an episode of Homeland?) The government, he says, needs to check everyone very carefully. It’s a lot of people, I say. He nods.

What will happen, he asks, in your presidential election. Ha, I bark. I like American individuals, he says, but I don’t like American international policy. I’m not so sure, I say, that I always like the individuals. Americans, he continues, are open, direct, candid, friendly, very warm. Who do you think, he says, will be the next president? Hillary Clinton, I say, and she’s none of those things. She will get along well, he says, with Merkel. We laugh. I close my eyes.

My family needs me to come home, it’s been too difficult to have me gone a whole month. And of course I can go back home, whenever I want; that was the first condition of my leaving. I planned to come to Berlin to work on my German, read literature and German newspapers (a fantasy, that last part, newspapers are hard), write, reconnect with friends, work on translations, and re-immerse myself in the capital, its particular jagged rhythms and the dark psychology of its spaces.

In August, I realized I had to turn my attention to the crisis, it was too big, too encompassing, and happening with terrific speed and violent energy. I was going to Germany in a moment of historical transformation that would affect the rest of the world. I decided to relearn Berlin through the experience of the crisis, and to try to tell a story that was rather unlike the one mainstream media is telling so dramatically. Mine would be a perpetual crabwalk, personal, a winding detour, like my experience. Returning to the States now, earlier than planned, brings home the awareness of freedom and privilege — with a US passport, I can go wherever I want in Europe, while many I’ve been speaking with in the last three and a half weeks cannot. They cannot go back, not if they wish to live; and, in many cases, they are also blocked from going forwards. While capital flows freely across borders, bodies — laborers — are stopped.  To what degree is diaspora a result of global capitalism? We’re living with the evidence.

The taxi was pulling up to Tegel Flughafen (airport) — the word for refugees, Flüchtlinge, once again audible, legible, all too apparent. I think of the breaking news about Berlin beginning to house refugees at the Tempelhof airport: no departures, just arrivals, and by the thousands. I can imagine the big white tents inside the even bigger hangars, where the US, for years after the war, landed a plane every five minutes, dropping supplies to aid the reconstruction of the city. After reunification, Tempelhof became a flashpoint for the differences between East and West Berliners — those in the East remembered the airport as a Nazi site, but for the West, it was a site of renewal, reconstruction, revival.

The division of memory turned divisive and so pronounced that the airport was never reopened for planes, but rather became the most unique playground in Europe: imagine getting to ride your bike on a runway, or run your dog, or fly your kite at a defunct airport. Just this past summer, it was the concert site for Lollapalooza. With unusual foresight, I had heard, the city kept all the porta-potties in place after the festival was finished. The fun-lovers who had to piss between Paul McCartney and Metallica are gone. Those fleeing their homeland will soon turn Tempelhof into a concert of the desperate. Maybe a good time to go, the driver says, reaching forward to pull a lever and pop the trunk, the situation here is a bomb, but no one knows when it will go off.

In the security process, I’m singled out for an additional “explosives” check. The computer cables, external disk drive, and adapter plugs I’m carrying home have set off protocols — the Germans are much more thorough than our TSA. They lecture me about my liquids, and the wand outlines my entire body without missing an inch of seam. A lot of these guys are old Stasi; they know what they’re doing.

Half-hour into the flight, I get up to use the toilet. I’m in a row near a lavatory that separates economy from business class. I head for the closest vacancy. A stewardess stops me. Are you sitting in business class or economy, she says. Economy. These are for business class, she says, there are four lavatories in the rear of the plane for economy. But these are all empty, I say, pointing to the folding doors, and I’m sitting right there, I point to my seat, a few feet away. You can walk to the rear of the plane, she says, as if offering a helpful suggestion. I’m permitted to go somewhere else, I say. Yes, she says, you can back there. That’s where you can go.

De-boarding at Newark. Passport control, nothing more than an exchange of silent looks. Baggage claim: a beagle walking with a customs officer points his nose deliberately at the plastic bag in my hand. What’s in the bag, the officer asks. Bread, I say. Anything on the bread? What, I say. Seeds or anything? (There probably are — it’s a half-loaf of Alpenstückbrot that I bought at the Swäbisches bakery where Karsten and I sometimes met). No, I say. The dog is praised, they move on. Newark is chaotic and dirty. TSA guys yell at passengers going through security, and yell at each other for creating havoc with new lines to expedite the process that actually lead to nothing but more confusion and slower lines. Der Prozess. The title, in German, of Kafka’s The Trial.  Systems. Borders. Permission. Control. What kind of society do we want to live in? What is necessary for meaningful life?

In the circular theater of gates to commuter flights at Newark, people seem to swim round and round like fish in a bowl, consuming snacks and media. A pigeon has found its way inside and wisely sticks to walking, following its own bobbing path, pecking at the crumbs. Is there animal control at the airport to remove unwanteds?

Humans are too busy here moving from one place to another to pay much attention. When it’s tired, the pigeon will find a place to sleep, tucked in the crotch of two steel beams. Maybe it will meet another pigeon. They will start a new life together here, flying creatures caught inside the vast structure of a complex system designed for flight. 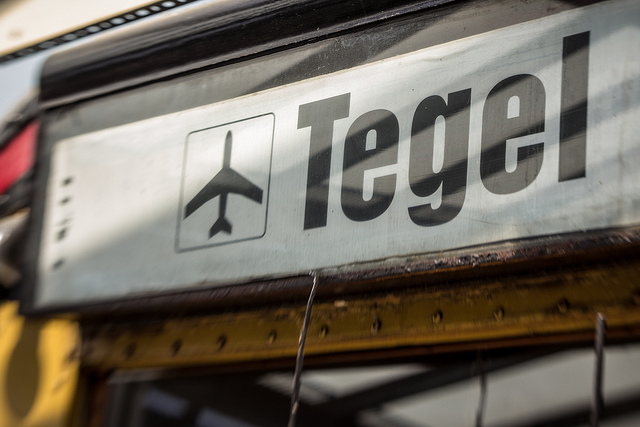