I head back to to Lageso. It’s been raining on and off for the last 36 hours, not hard, but hard enough to make a day standing outside waiting absolutely miserable. The grounds have turned muddy; large puddles have joined to create even larger pools that the refugees work around as they navigate each other’s haphazard maneuvering. Bassel and Sami spot me; we shake hands. They’re surprised to see me again. Journalists covering this complicated fast-moving story have so many aspects and pieces to put together, they keep moving on to the next site, the next conflict, tension, announcement, ineptitude, disaster . . . Today there are so many television reporters and cameramen on the grounds with their equipment, you can feel how curtains have parted on a new theater of the situation. What publication do you write for, what kind of writing are you doing? asks Bassel. I’m writing for a journal in the US, I say, and show them a letter from Tom Lutz, the editor in chief of LARB, confirming my assignment. I’m a poet, I add, I teach at the university.

Hamraz, a 39-year old mechanic from Herat, Afghanistan, overhears and approaches. I also am teacher, he says. We shake hands. What do you teach, I say. English, he says. He is here with his wife and two daughters, ages 7 and 13. They’ve travelled for three weeks to get to Germany, through Afghanistan and into Iran (where his parents live), Turkey, Greece, to Hamburg, and onto Berlin.

A non-believer, Hamraz is fleeing religious persecution. In Afghanistan, his atheism puts him in life-threatening danger; were he to move his family in with his parents, his life would be in danger there as well. Here in Germany, he says, is democracy, freedom of speech, freedom of opinions. Germany is my desire, he says. My mind is like the culture of Europe, my opinions are the same. I like the law, my security here is good. I am relaxed here. I cannot be persecuted for what I think. I can wait here. Twenty days. One month. Two month. It’s not a problem. My children are safe. They play every day. My future is here. I want to work. I have to continue my lessons. What is your work, I ask (maybe he teaches English on the side, or as a public service). Big autos, he says, trucks and vans. My father is a mechanic; I learned from him. I learned English in Kabul. You speak well, I say. I reach into my bag. Here, I say. I put a Langenscheidt German-English dictionary into his hand. The bright yellow cover of durable plastic is practically an icon of foreign language study. For me? he says. His gratitude for so little embarrasses me. In an instant three more guys join us, talking to Hamraz in Dari and gesturing at me. They want to know if you have more, he says. I wish I did, I say. I get a troubling cold stare from a square-jawed big-boned guy. I don’t like the look of him. I say good luck and call it a day.

Audio: S7 train from Alexanderplatz to Bellevue, the S-bahn stop for Lageso 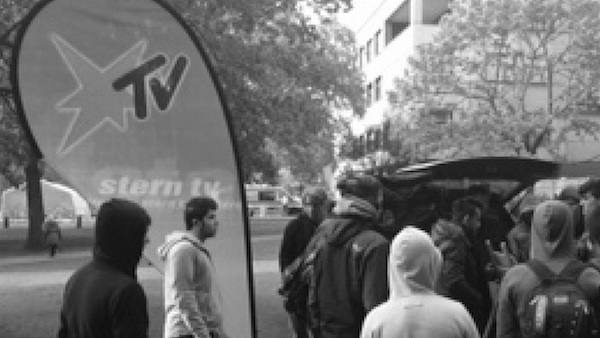