The weather has turned grey and the temperature has dropped without the sun. At Lageso men and women stand about in heavier coats and hats, hoods and scarves. A man walks by wrapped tight in a bedsheet. A security guy in red fleece and a close cropped Mohawk trails him for a while with his eyes. I’ve been rehearsing my few words of Arabic on the way in. A young fella with a pleasant aspect stands nearby. Marhaban, I say, atadhir, min fadlik (Hello, excuse me, please) . . . Do you speak English? Yes, a little bit . . .

Marwan has been living for the last two years in the adjacent Charlottenburg district of Berlin, where Nabokov spent his years in exile and Walter Benjamin his turn-of-the-century childhood. Marwan is here with his cousin, Sami, who arrived from Damascus three weeks ago. Sami appears by his side, suddenly made visible to me by virtue of my learning his name. In their mid-twenties, Marwan would like to continue his university studies in business (he had finished one year in Damascus before fleeing), and Sami has hopes of continuing practice as a lawyer. Marwan has just completed a two-year state-sponsored language course. (We speak in a mixture of German and English.) Sami’s English is not as good as his cousin’s; it will be difficult for him, I think, at age 26, to learn enough German well enough to practice law in Germany. But maybe I’m simply projecting my own experience trying to learn German — after all, he’s obviously smart and well educated; he has family connections here, and the greatest of motivations: survival and necessity.

We are joined by a friend, Bassel, also a lawyer, who made the journey three weeks ago with Sami. Fearing conscription into Assad’s army in Syria, they each sold their car to raise the 5,000 or more euro to pay the traffickers. I love Syria, Marwan says, we all want to go home. He is thinking of the long journeys here, through Jordan, Lebanon, Egypt, Turkey, Morocco, Afghanistan . . . But we must stay, he says, until the war is over. So you are here now, I say, and you’ve been here for two years, and you’ve learned German, and you want to continue studies at the university — so, let’s say that happens — when will you return, in two years, in five years? Maybe in ten years, he says, or twenty years, or thirty years, when the war is over — I have to think in terms of my children . . . (What children?—he is imagining his future German-born children . . . Will they want to return, should it ever be possible?)

What’s it like here, waiting, I ask.   It is terrible, of course, says Bassel. Marwan explains. They are only calling twenty numbers a day now, he says, gesturing at the console displaying nine brightly lit amber numbers. And these security guys are Turkish, he says, they are very cruel. They pushed a woman down, with her baby, and killed her. Where, I ask. Right there, he gestures to a central area in front of the console. Why, I ask. Who knows, because she was asking about something and he didn’t like it. You saw that happen, I say. No, but I heard about it; it happened. The Turks don’t want us here, he went on, the German people are very good, they try to help, but the government is too slow. Why do you think they’re so slow, I say. Because, he says, they want to discourage more people from coming.

Fathi, another friend, joins us, a 23-year old engineering student from Damascus, who walked for a week without sleeping to get to Berlin. Sami looks at me from under a hoodie he’s wearing beneath a bigger coat. Excuse me, he says, but where are you from? I’m from America, I say, from Washington DC; I’m trying to write about what’s happening here so that people will understand. Sami looks at me with a wry little smile. I am sorry, he says, but America has been part of the problem. I know, I say, that’s why I’m here. What do you want the U.S. government to do now? Marwan breaks in. Russia will not help the situation, he says. Putin is not really fighting IS [Islamic State], he is with Bashar [al-Assad; but they all refer to him as Bashar]. The U.S. only has to fly planes over Syria, he continues, and the army will shake with fear and go underground. That would help? I say. They only have to show they are present, says Marwan. So, you want the U.S. to show its potential for using force in the region, I add. Yes, he says, that would make some difference. Sami looks at his phone. Excuse me, he says, and walks away.

You all have phones, ja? I say. They nod. Where are you charging them every day? Marwan says, I bring a portable battery I charge at home. I scan their faces; they’re a sweet bunch. I can feel the strength of their comraderie, their determination and courage. I have to go, I say, what would you like to say today to Germany? Give me a number, says Bassel, I want to work. Marwan writes down his e-mail address on my notepad. Shukran lak (thank you), I say. We shake hands.

On the way back to the S-bahn station, I stop at a Jehovah’s Witness stand on the sidewalk right outside the Lageso grounds. I’m struck by the cover image of their pamphlet in Arabic, a photograph of a happy modern Arabic family (the mother is not in hajib, the father not in robes, the children’s digs are from any fashionable catalog or outlet—they could be a secular family anywhere in the West). Posed together, they smile into the father’s smartphone as they take a family selfie. I pick up a copy and start leafing through it. A white German guy in tweed—he’d fit in at Oxford or Cambridge—begins to tell me about the contents: Lots of good information about how to manage money, be a good parent, a good husband and wife . . . Are Muslims trying to register at Lageso showing much interest, I say. Oh, yes, they really are, he says. They know about us already because we have people in Syria. But here, he continues, Arabs who were afraid to show interest in Christianity are free to ask questions and come to our meetings. And some Arabs are already Christian, I say. Oh, yes, they really are, he agrees, and we have so much practical information to help them get started in German society. Are you getting many converts yet, I say. Oh, yes, we really are. The Arab people who come to Germany are very interested. I find the cheerful optimism grotesque given the situation of the refugees; the modern family depicted in their literature, pure fantasy, has no resemblance to anyone or anything in Berlin—Muslim, Christian, Jewish, or of any faith. But the Jehovah Witness’ prohibitions (no interfaith marriage; demonization of sexuality outside of marriage, including homosexuality and masturbation), and their control of congregants’ lives, does dovetail nicely with Sharia control of individual personal life. Even their corruption of sacred texts (the Bible, the Koran) as fundamentalist codes of conduct share a common set of ambitions. Maybe the guy’s not exaggerating.   And with the 165,000 Jehovah’s Witnesses in Germany living peaceful lives . . .? There could be, and are, worse influences . . . (Though the history of the Jehovah Witnesses appeasing of Hitler is a different story). 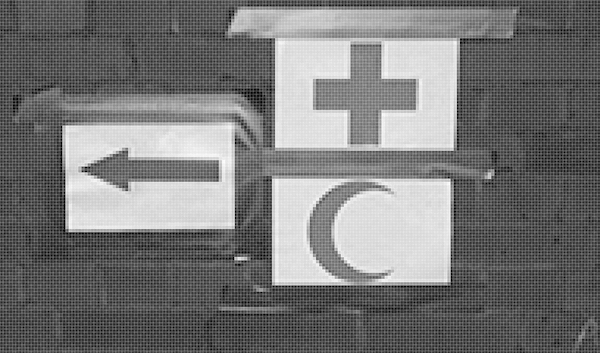