It’s been a year since the last time we saw each other; hi! I’m so happy to get reacquainted with you. In the last 12 months, I’ve changed jobs, relationships, homes, and hair colors; stopped being scared of killing plants (and mostly stopped killing plants); learned how to roller skate; and forgotten how to cook. I’ve missed hanging out with you here. Starting today, we’ll be back with the usual dose of aggressively earnest advice two Thursdays a month; I hope you’ll join us, and as always, please send your questions our way.

A friend of mine keeps up a running color commentary on the small miseries that constitute his life: he can’t find his water bottle, the Chinese food place was out of dumplings, he hates his landlady, he found the water bottle but now he can’t find his wallet, he keeps getting in car accidents, his parents are evil, he doesn’t like his wardrobe. I’m no stranger to fine whine, and like a taste myself now and again, but it always seems like he’s letting life happen to him rather than making an effort to change things for the better. I feel like it would be better for both of us if I let him know, gently, that I think he could take more responsibility for his life. While it might be more polite to keep quiet, I’m not sure that would best facilitate us remaining friends. Your thoughts?

-An Agony Aunt with a Bellyache

You know what? I’m over politeness. And I think you should be too.

Like its tepid cousin “nice” or its vague neighbor “smart” or even its deceptively boring acquaintance “cool,” the term is style masquerading as substance. It’s not a virtue; it’s a veneer. Politeness offers tight smiles and eye rolls behind closed doors, warmed-over pleasantries instead of any real warmth. “Polite” is scraped up from the bottom of the compliment barrel, or maybe more accurately from the top of the “nothing nice to say” barrel when staying silent isn’t an option.

“How was your date on Tuesday?”
“She was… polite.”

“What do you think of the new guy from accounting?”
“He’s… polite.”

“What’s your favorite thing about your best friend?”
“They’re so polite to me, no matter how much I whine.”

The only way any of those responses is realistic is if it’s sardonic, not sincere. Politeness is for your bank teller and barista — though even there I’d favor briefly earnest conversation when it’s feasible — but politeness is not, under any ordinary circumstances I can fathom, for the people you’ve invited into the tender insides of your life.

Why, then, does politeness appear to be your guiding light in this friendship? Yes, it might be more polite to let others dwell in their discomfort instead of knocking at its edges or knocking them off their accustomed balance. But it’s hardly the point of friendship to avoid jostling one another. By letting this guy’s whining wash over you, you’re holding on to the outline of a relationship, not the meaty middle of one. It’s a banana peel left in the fruit bowl: the suggestion of what it once offered and protected, its sweetness not much more than a flimsy sentimental shell.

Politeness, at its best, is a tool, not a trait with any weight of its own. It’s a framework of expectation that allows strangers to approach each other, a defense strategy for greeting a grouchy great-aunt at Thanksgiving once a year, an expectation of propriety that keeps an undercaffeinated id from lashing out at the harried guy brewing the americano. It is, in essence, a layer of distance.

Useful, yes. But that protective layer insulates in both directions: against injury, but also against intimacy. Friendships demand participation, not retreat. Leave the politeness for strangers and tableware.

Your friendship with this guy sounds like a particular challenge, though. I’m a fan of complaining, to be honest — few things help me clarify my tastes or perspectives like chewing on the “why” of annoying conversations or enthusiastically criticizing bad movies, for example — but there’s constructive kvetching, and then there’s mistaking crabbiness for personality. No wonder you’re at the end of your patience.

On the spectrum from idle chit-chat to painfully honest heart-to-hearts, there are plenty of choices — but the only ones you’re in charge of are on your end. Yes, you’d probably have a livelier (not to mention easier) friendship if this guy stopped blaming his landlady and the neighborhood dumpling joint for his problems. Chances are, though, that you can’t make that happen for him. Instead, you can decide what you want from him yourself, then ask for it. The rest is up to him.

Instead of humming in sympathy to his latest, you could point out that he might tell his landlady directly what he needs from her, instead of telling you, or that it’s pretty easy to buy a whole new wardrobe of grandpa sweaters or fedoras at the nearest thrift store. You could shrug and try the noodles if the dumplings are out, or be honest if his description of a parental faux pas doesn’t really seem that bad. Better yet, you can offer your sympathy and then a change of subject; the summary of his afflictions sounds, more than anything, kind of dull.

That doesn’t mean you should ignore him wholesale, not if you want to keep a connection. Though politeness doesn’t fall on my list of friendship ingredients, kindness does, and it’s clear that he’s trying to communicate something by complaining. But so far, it sounds like he’s the only one effectively communicating anything at all, since polite nods are closer to read receipt than response.

You write that breaking his mopey monologue won’t help you stay friends — but what you describe sounds like it’s polite distance you’re preserving so far, not much of a friendship. If you’re after closeness, then forget trying so hard to stay polite, and tell him something true instead.

There’s a hundred ways to make a friendship. You might never drive 200 miles to rescue him after a car accident or offer advice on what to text a date the next day or meet him for an early morning coffee, never share your deepest fears or a karaoke duet or even a corn dog. But if you don’t chip away at the brittle barricade politeness builds and buttresses between perfect strangers, perfect strangers is all you’ll really get to be.

For a little unprofessional advice in these uncertain times, send your questions to [email protected] or to our anonymous portal. We want it all: the embarrassing, the baffling, the epistemological. Check back in two weeks from now for another dose of aggressively earnest advice, next time on Asking For a Friend. 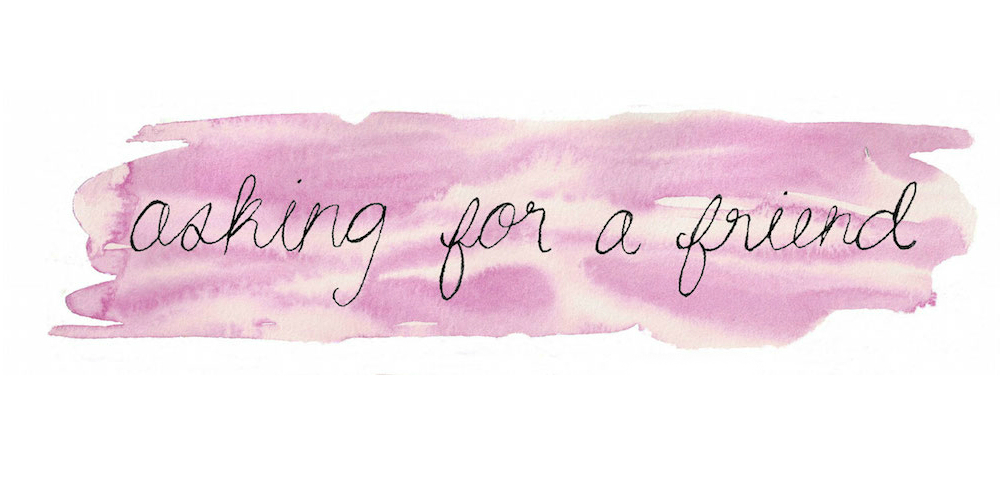