The Turkish military coup of 1980 instigated a violent and repressive regime which murdered and imprisoned its opposition, a large part of which belonged to the anti-imperialist Turkish student movement. The coup, as well as the military regime it engendered, was directly supported by two American presidents — Carter, which pushed for it as a part of the eponymous doctrine, and Reagan, who gave more than 3 billion dollars in financial support to the military government.

The organizers of the coup, led by military officer Kenan Evren, immediately took upon themselves to imprison, blacklist and execute their opposition, many of which belonged to the Turkish Student Movement, a leftist political organization defined in part by their opposition to American imperialism. The repression was bloody and efficient, with prisons turned into torture centers, and imprisoned members of fascists militias released in exchange of their promise to execute leading voices of the student movement. While the coup was originally welcomed by much of the international community — its secular authoritarianism understood as a bulwark against the forces of communism and islamism — much of its brutal history is still being unearthed, due to the tireless work of organizations such as the Human Rights Foundation of Turkey. The aftershocks of the military takeover have resonated since within Turkish culture. In cinema, the imagined childhoods of coup films emerged out of the experimental scene into the mainstream, notably with Çağan Irmak’s 2005 My Father and My Son. It is also the event around which many of the greatest recent Turkish novels articulate themselves, notably Nobel laureate Orhan Pamuk’s Silent House, set on the eve of the coup, and Murat Uyurkulak’s groundbreaking modernist narrative Tol, in which the coup erupts as both the end and the beginning of any political revolutions yet to come.

For artist Hande Sever, whose exhibition ​When the Geraniums Bloom ​just opened at the Visitor Welcome Center in Koreatown, this cultural history is both personal and political: her mother was imprisoned without trial for three years in one of the detention camps set up by the military regime. While there, she grew beans as a symbol of the outside natural world she was deprived of, an attempt to recapture within incarceration a modicum of freedom and beauty. Memorializing this act of resistance in a temporary sculpture, Sever has attempted to grow hundreds of beanstalks in glasses shackled to the walls of the gallery — a fragile equilibrium of natural beauty and metallic threat. On a speaker, a song of protest seems to forever begin anew, looping before the melody can find its equilibrium.

The geraniums evoked by the exhibition’s title, a symbol of resistance for the Turkish student movement, are nowhere to be found. In their absence, a text provided by the artist traces a chain of resistance that crosses between the past and the present, linking the struggles of the Turkish student movement, long histories of carceral repression, and the living legacy of America’s interventionism. Exchanging an old symbol for contemporary context, the work refuses to choose between delicate remembrance and political rage, a balancing act striking in both potency and precarity. 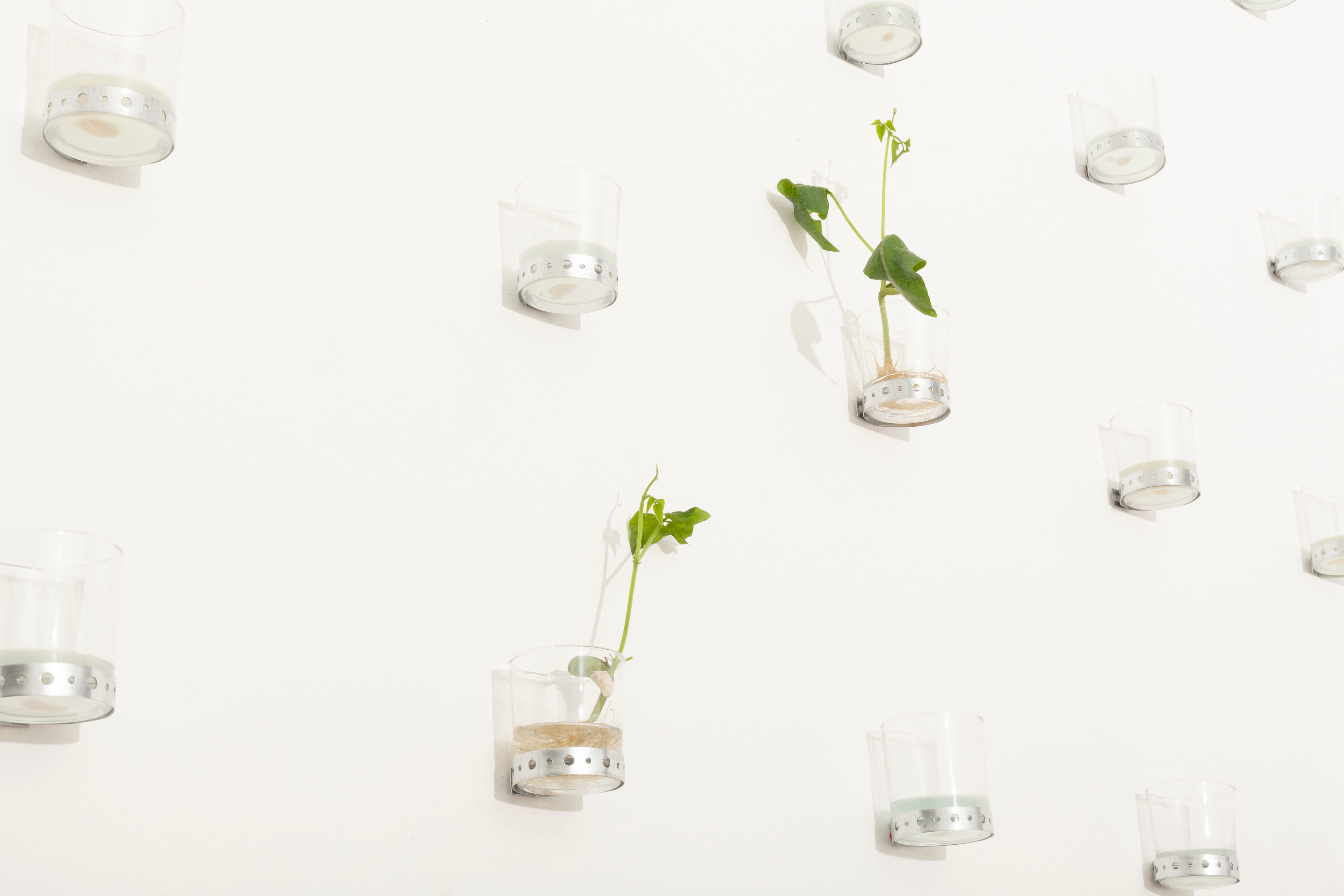