In The Beach Bum, Moondog (Matthew McConaughey) is having the time of his life. He wears colorful fabrics and sunglasses that flip up; he picks up a stray cat on a dock and then drinks heavily; he sits in the sun in a boat near Key West, then in Miami. He is not a drug dealer, no, nor a pimp, despite appearances. He is a poet. He writes — as he repeatedly says, with the word condensed into one bouncing syllable — poems: little pleasurable things that make no sense, like the characters in a Harmony Korine movie.

Late in high school, my friends and I loved and revered Harmony Korine’s Spring Breakers (2012), a film about (if anything) the descent of four female college students into the seedier side of beachside party culture. Why were we so fixated? It was fun to watch (a music video, really), but also seemed to have something to say. We weren’t quite sure what; that was beside the point. Or, that was the point — its inscrutability lent itself to light pseudo-philosophical satisfaction. It makes you think, we said to ourselves, stoned. About what? We didn’t get that far. We played it on loop projected on the wall at parties. We had a great time.

I came into The Beach Bum, Harmony Korine’s latest, with my guard up. Korine couldn’t impress me so easily now, I thought. I had matured. I wouldn’t mistake sex, drugs, and mumbled aphorisms for profundity — not this time.

But while Spring Breakers starts dark with a masked robbery and descends from there, The Beach Bum starts in slovenly ecstasy and maintains the high throughout. Minutes in I was sporting a grin more shit-eating than Moondog, who, when we first meet him, is on vacation (even by his standards) in Key West, avoiding responsibility, reading poems, rescuing a cat. He gets called home to Miami by his wife, Minnie (Isla Fisher). He comes back, but never really touches down.

Dialogue moves with the same indiscriminate confidence. It’s unclear what would be stranger: if these lines were all scripted and forced through the actors, or if they were improvised. Either way, the effect is the same. They come off as artfully awkward and awkwardly artful, equally. Flicker (Zac Efron), Moondog’s fellow patient in rehab, says things like “even Jesus was a sinner, so we clean, baby!” I roll my eyes, but I can’t help but give credit for effort. McConaughey pulls the nonsense off the best, a veteran Rust Cohle with the angst cast off. Lebowskian, he mumbles to two sets of security guards in two different scenes: “You guys don’t read a lot, do you?” and “Have you seen Magnum PI?”

As Moondog slurs and the cuts jump, all this can feel lazy. Was it intentional? My 16-year-old kid could come up with this stuff under the influence, if not do the cinematography or art direction, a cynic might object. But I’d give it more credit. Every scene is like a slow-moving painting, started with a prompt. What if Snoop Dogg and Matthew McConaughey smoked weed together? Let it roll. How about Matthew is on a boat with a literary agent this time? Okay, go. What if he gropes his new son-in-law’s crotch assessingly at his daughter’s wedding? Yes, and! Let the sun set, let’s look at Miami.

The setups might not sound sophisticated, but the pleasure is in the details. Each color bleeds and pulses neon; when two or more are put together, it’s astounding. Zac Efron’s character is wearing a Bluetooth earpiece and sporting a tiger-striped beard as he vapes out of one nostril in rehab. A Bluetooth! What an insane excess to get all these elements together and have them play, even messily. I’m grateful someone’s doing it.

Korine’s fun only occasionally comes at the audience’s expense. The third quarter of the film slips a little too far into an early-aughts-Adam McKay-turns-arthouse creole: in one scene a blind Rastafarian flies private planes, but only when high; in another, Captain Wack (Martin Lawrence) and Moondog talk graphically about the sexual habits of dolphins in front of a family. In these moments, Korine risks coming off as a dangerously overzealous server, catering to an imagined group of gullible stoners. The shock wears thin.

But the pleasure doesn’t. In the last act, the lazy arch of the narrative resolves. Moondog finishes his book of poetry. From the notionally Southern-accented lines of Lewis (Jonah Hill as Moondog’s agent), we learn that he has been nominated for a Pulitzer (“A pohlitzah,” Hill drawls twice, misheard the first time). The two eat fat ice cream cones in front of a saturated Florida sunset. “You was acting like a fuckboy there for a minute,” Lewis says, and the audience nods. But we’d been absorbed.

After the film, I encountered a Russian man named Alexei unlocking his bike outside the theater. He’d been seated a few rows in front of me. When I asked for his thoughts, he said he’d been rapt too, but unpleasantly. He felt immersed in something he didn’t enjoy. “In human filth,” he said. “Or an advertisement.” When he asked what I liked about the movie (“Colors?”), I wasn’t sure how to respond.

Near the end of the film, a journalist approaches newly Pulitzer-winning Moondog, notebook drawn. He asks, awkwardly, how he does it — how he has so much fun. I sat with my pen in hand in the theater, waiting. “I’m quite certain that the world is conspiring to make me happy,” Moondog says. I jot the answer down, though I know it won’t prove useful. There’s no sense in trying to make much out of all this. The joke is on the analyst. If we can join the party instead, let’s. 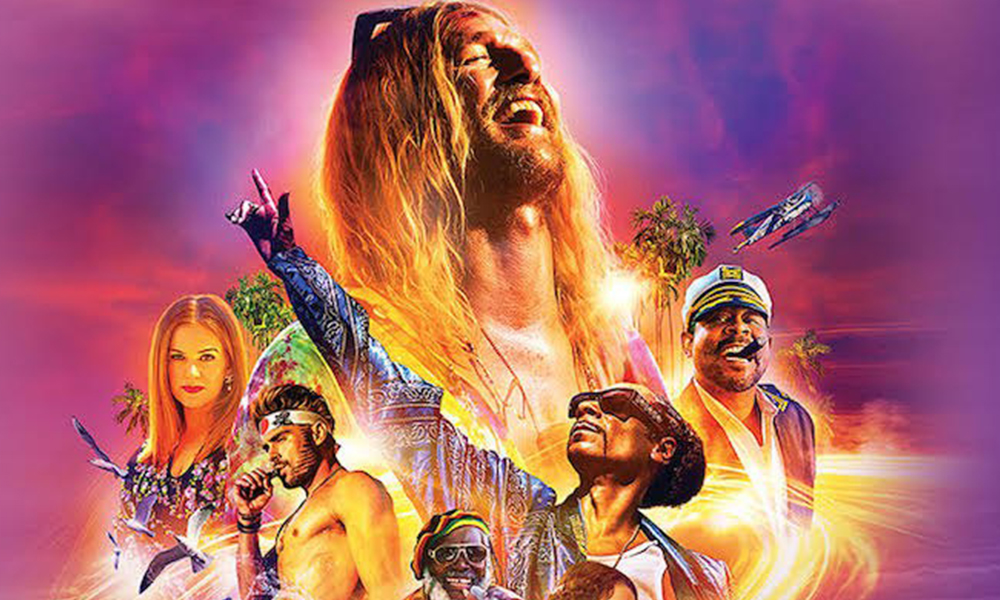