These are just some of the artists that have graced The World Stage over the last 30 years, and their names were a strong presence at an October 16th press conference held as the non-profit performance and educational space seeks to chart its future in a changing Leimert Park. The neighborhood, called by some the “black mecca” of Los Angeles, is almost certainly on the verge of a significant transformation following the MTA’s approval of a Leimert Park Village subway station on the new Crenshaw/LAX light rail line. Neighborhood activists had long lobbied for the stop, which until late spring appeared to be far from a done deal. But within weeks of a May press conference finally announcing funding for the station, investors had bought up two buildings on the east side of lower Degnan Boulevard, home to a cluster of black-owned businesses, most of whom have been there for over 20 years.

Operating as two LLCs and communicating with tenants through a property manager, the new owners have chosen not to renew leases, posted numerous pay or quit notices, and failed to respond to requests for a meeting. A handful of businesses are already gone. After an unsuccessful attempt to get Councilman Herb Wesson to intervene on its behalf, The World Stage has gone public with its fight. The non-profit is seeking, among other things: short-term emergency funding to forestall the possibility of imminent eviction; a meeting with the new owner to discuss his plans for the building; “cultural landmark” designation that would solidify its status as a stakeholder in the neighborhood’s redevelopment; and political and economic assistance from city and county officials to ensure the organization’s long-term viability.

The emotional press conference (which later spilled out onto the street in a spirited conversation about the neighborhood’s future) featured a number of speakers paying homage to the rich legacy of The World Stage. It is a space that is, in the words of stage manager Matt Gibson, “humble but hallowed.” Its motto affirms the Stage to be “not a space but a spirit.” Writer and performer Jerry Quickly calls it an “art church.” Artistic director Conney Williams (a guest the previous day on a segment of Warren Olney’s Which Way, LA? on KCRW) spoke of how, in the difficult months after the 1992 Rodney King verdict and the unrest that followed, The World Stage provided a critical haven for “fellowship and healing.” Executive director Dwight Trible highlighted the thousands of young people who have passed through the drum, vocal and writing workshops offered at little or no cost; as well as the thrice-weekly jam sessions giving aspiring local musicians of all ages and abilities a chance to cut their teeth.

But the afternoon was not simply an exercise in nostalgia. Damien Goodmon of the Crenshaw Subway Coalition insisted that the huge investment in the Crenshaw line, which he characterized as the largest public works project South LA has ever seen, must translate into economic development that truly empowers the local community, and not the kind targeted mainly at tourists. The gathering attracted nearly 40 attendees, a number of whom stepped forward with ideas for putting the organization on more solid footing, and with offers of help. KPFK music director Maggie LePique presented a $1000 check from Doors drummer John Densmore, a long-time admirer of Billy Higgins. World Stage board president Adé Brown is hoping to raise $25,000 to stabilize operations in the coming months. Supporters are encouraged to donate via a PayPal button on the group’s website. 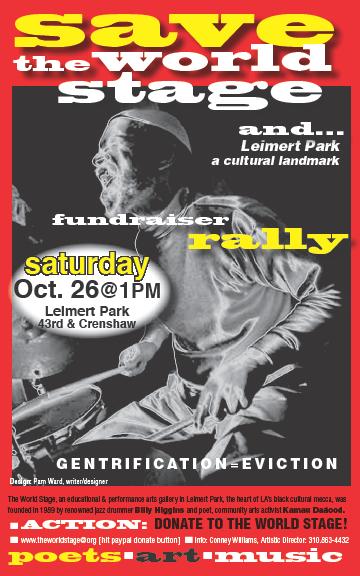 A somewhat paradoxical challenge facing The World Stage is that, while it is well known within the black community and has a national and even international reputation amongst jazz aficionados, in many ways it flies below the radar in Los Angeles. Leimert Park itself, set just far enough off the main thoroughfares of Martin Luther King Jr. and Crenshaw Boulevards that you can easily miss it if you’re not looking for it, has its own visibility problem. Happily, this weekend offers a couple of excellent opportunities to discover (or rediscover) this vibrant and diverse neighborhood.

On Saturday, October 26th at 1pm, The World Stage invites the public to its performance space on 4344 Degnan Boulevard. Against the backdrop of its Saturday Jazz Workshop there will be a community rally with speakers and poets and the latest information about The World Stage’s campaign to remain in Leimert Park. Then hang around to check out the rest of lower Degnan, including Eso Won Books across the street.

And on Sunday, October 27th from 3pm – 8pm is the Leimert Part Art Walk, which will feature art exhibits, live music, and food vendors. As a special attraction, the historic Vision Theatre (currently being renovated under the purview of the Department of Cultural Affairs) will be opened up for an exhibit curated by Ben Caldwell of the multi-media art and training center Kaos Network. 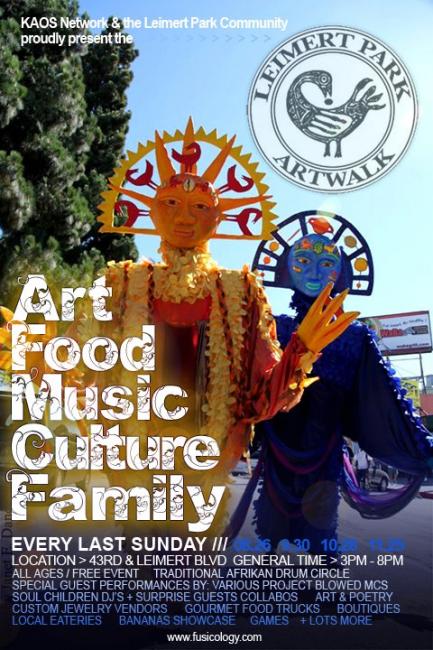