It is 120 degrees outside, and yet the locals continue to tell us that this is a cool July. I stopped noticing the constant sheen of sweat shortly after we arrived for the second time here in Blythe, CA, near the Arizona border, over a week ago. I have come with a team to lead a class on the fundamentals of teaching art. In this case, the students — and future teachers — are men that are incarcerated in two prisons just outside the town. They will eventually teach their peers in the prisons. We are midway through the second 10-day session of a training that is designed to empower them to create community through the arts by sharing what they have learned, many while locked up, about painting, drawing, music, poetry, and more. The project is something I received a grant for from the California Department of Corrections and Rehabilitation to implement here, but months ago, as I wrote the grant application, bent over the computer in my cool office, I could never have imagined the depths to which our participants would go in engaging with this content and striving to understand, grow, and be successful. They are going to be incredible teachers.

Today it is just me and one other teacher. We were happy to add this Saturday session because it is the only day that a room was available in the education area. This was important because, at this institution, the men must undergo a strip search before and after leaving our class each day. This is due to both the security level of the prison and the fact that the classroom we were assigned to is located in the vocational area. (In the first couple of days, the correctional officers made it a point to remind us about the search but, after they got to know us, they stopped explaining it; we took this as a small success — they accepted us — but in retrospect it also meant that I nearly forgot that our students underwent this intense experience each day.) Because of the restrictions, the men were also not able to bring anything to class. One reason I was so eager to hold a class in Education is that it was slightly less restricted and so the students would be able bring their art, music, and writing to share. Due to the circumstances, we had already gone through three full weeks of daily classes on teaching art — and six weeks of independent study — without having seen or heard any of their art or music. That would change today.

At the third check point, I was given a massive key in exchange for my two chits — small metal discs inscribed with my last name which are used to exchange for keys and an alarm. To us, the key felt comically oversized, double the size of my hand, heightening the positive mood of our visit. We walked through the guard house, across a dirt pathway, and through a fourth locked gate to get to the prison yard, around which were situated buildings for the library and education classes. We entered with the massive key and were greeted by a cheerful correctional officer. (This isn’t rare, but neither is it typical, especially on our first visit to a new area.) He went so far as to show us all the various rooms where we might hold class for the day and let us select one that would work best. Once we had chosen a room and arranged it with large tables situated down the center and chairs around the sides in a large oval, the officer began to call the students to class. For the first time since we had started here, they arrived with their artwork in hand.

Gradually, the tables were filled with drawings and paintings and the occasional sculpture. As more men arrived, they crowded around the tables to see the art and, before long, we started a sign up list for writers to read their works aloud. As we were appreciating the visual art, oohing and ahhing over details of line and color and craft, one of the men asked if we could listen to the music at 10:20 because the band would perform after the church service. I glanced at the clock briefly and said, “Sure!” Compared to our tightly scheduled teaching days, complete with a detailed agenda leaving time for lectures, discussions of art and texts, written and shared reflections, and more, this open-ended art day felt calm and relaxing for everyone. The sense of generous sharing and vibrant creativity were palpable in the room. It felt happy.

At some point, habit suggested that I ought to offer some guidance and I reminded the class of what we had been studying the day prior — how to give specific and supportive feedback — and asked them to be sure to offer it to one of the artists. The suggestion didn’t hurt but I don’t think it was necessary, either. Already, several were telling one another what they liked about what they saw, organically, like you might do at the opening of a friend’s exhibition, but in a new way, too, discussing details and asking questions. In my own conversations with artists that day, I learned how a friend had created a painting for one student while in solitary confinement, using brushes made by hand from the scraps of straw left behind from a broom. This student too had created work while in solitary, wildly detailed portraits made with ink gingerly eased from the plastic tube of a ballpoint pen. Next to these were model helicopters constructed from cardboard and bits of plastic, replicas of military helicopters. (Later, a guest glanced at the helicopters and told one of our students, “You know those things inside out,” adding, to me, “he used to work on them, on the outside.”) Down the table, a series of paintings of President Obama caught my eye. “He’s my favorite president,” the artist told me. “Me too,” I shared, beaming. He said that he had painted these solely with coffee, also while in solitary.

While the atmosphere on this particular day did feel in many ways like a friends’ gallery opening, we had learned that some of the men didn’t speak to one another, or to most anyone of another race, before coming to this class. It’s not that they were racist or discriminatory, per se, but rather that they were surviving in a prison context, where the general population tends to self-divide according to ethnicity and background. Here in the class, as in most prison programs, the groups were mixed. At one point, a student told us with grateful surprise that he was paired with someone in a class exercise that he would never have spoken to before taking the class. This context makes the sharing that happened throughout the morning — of art and music and poetry ostensibly, but also of feelings and personal expressions and thoughts — even more powerful.

Soon enough, 10:20 rolled around, and then 10:30 and 10:40, and someone came to say that the musicians were ready. We made our way two doors down the hall to another room where the musicians were gathered on one side, with a set of drums, a couple guitars, and a ramshackle keyboard. We arranged ourselves on and around the cluster of chairs opposite them and the concert commenced. First the band leader, a student of ours that had studied and played music all his life, played a piano piece while a younger student read a poem about being human — suffering, sins, and surrender. We were mesmerized. They continued with a series of songs they had prepared for us, all written or composed by someone in the group. It’s hard to explain the effect that this live music had on everyone. I guess it’s similar to a concert where everyone listens together to a favorite band, but there was something different; truthfully it was unlike anything I had ever experienced. It was as if somehow the music removed the bars, for a precious few moments, and the air seeped in. Guys in the back even started to dance.

After a couple encores, we made our way back to the first room for the readings. There was a worn podium in the front of the room where each each writer stood to share his writing. One by one, they came up to read. Most were nervous but the crowd was kind and supportive. It was easy to be; the writing was powerful in the way that good writing — writing that has something to say and says it clearly and honestly — can be. We heard the most ingenious rhyming fairy tale, a moving apology letter that left many misty-eyed, poems that our musicians wanted to set to song, stories that opened up a window into someone’s life, and reflections on art and imagination and life. After each writing, I asked if anyone had comments. At first, the audience was quiet. But before long, we barely had time for all the thoughts and appreciations. The last reader was among the youngest in our class. He was tall but baby faced, like he had just left the streets of East LA — or juvenile detention — and landed here. His piece was about expectations; “Let it be your answer. Let it be your truth.” When he was done, an older musician, likely from another neighborhood back in the day, said with admiration, “You’re a philosopher, man!” Another student mentioned that it was really hard to write in the second person and that he had done it so well. “What’s that?” The young philosopher asked with genuine curiosity. Later, I saw them talking. The youngster wanted to know more, saying, “I want to sign up for your class.”

When 12:00 rolled around, the time our class was over, everyone stayed without saying a word. As it reached 12:30, past lunch, it really was time to go. We said our goodbyes and, though we would see them again on Monday, it felt like the end of something special. A few students left but many still lingered, talking together in small clusters or coming up to thank us for facilitating this day to share their art. The cool officer we had been so lucky to work with that day finally told everyone that it was time to go. Still, some stayed behind, slowly making their way to the table to pick up their IDs on the way out and then make their way down the narrow hallway and back out to the yard. I gathered up my bag and the giant skeleton key and we followed. 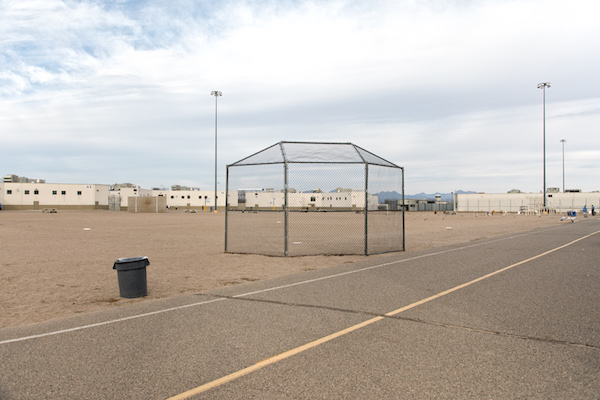