I am sitting on a yoga mat in a cavernous gym in one of the oldest prisons in the state of California. All around me, clusters of men clad in institutional blue emblazoned with the yellow word “prisoner” are settling into their weekly art classes led by our collaborative project, the Prison Arts Collective. Next to me, the guitar class is already in session and students are learning new chords from the patient and dedicated facilitator, a man who is also incarcerated here. Other classes include an open studio, photo collage, creative writing, and creative brain training, all led by a current and former CSUSB students.

Gradually, the yoga students make their way to the semicircle of mats. Directly across from me, three older gentlemen sit in chairs behind their mats, one holding a cane and another wearing a bright orange vest with the words, “mobility impaired.” The other men range in age from their twenties to maybe forties. (I am generally terrible at guessing ages and it’s even harder in prison, where people are isolated from the whir and pulse of everyday life and often look young than their years.) I have met most of these men over the past five years that I have been coming here but there are some new faces, too. I greet them and explain that I will be leading the class today. One student raises his hand to politely inform me, with a mild sense of worry, that they normally have two groups, a chair yoga session and a mat session. I explain that I am subbing for our regular teacher but will also make time to visit the other classes so we will all practice together. I add that I have taught yoga and say with a smile, “it will work out.” In my mind, I make rapid adjustments to the plan, considering what will make sense for these varied bodies on this chilly December morning, three days before Christmas.

I ask if anyone knows what a mantra is and a man that is seated cross-legged on his mat responds, “It’s a prayer that you repeat over and over for focus.” I think this is a pretty solid definition and don’t add much except to say that it can also be a tool for focus or meditation and doesn’t have to be a prayer. I was aiming for inclusivity but it may have been unnecessary; while the secular potential of yoga is prominent outside these walls, most everyone I have met on the inside has a close and regular connection to some form of prayer or spiritual practice, whether or not they did before they got here. Next I share a blue and white bookmark that I brought with the words “Choose Peace,” and offer that this can be our mantra for the day. We move into a fun and friendly class that bounces from English to Spanish and back again, from seated to standing and lying down, using mats, the wall, the floor, and even a rolled-up jacket at one point. Though I offer variations, we do pretty much the same practice after all.

From yoga, the men make their way back to class, where the teaching artist guides them to create a haiku and image for each season of the year. In the photo collage class, a student that has been with us a for a while is making a striking piece integrating street art, collage, and realistic drawing in a way that feels new and exciting. In the open studio class, I talk to a young man that is creating a beautifully detailed drawing of a skeleton looking into a mirror that reveals a young woman painted as a calavera. He tells me he is creating it to send to a friend that is in the early phase of recovery from addiction. In our Creative Writing class, led by two CSUSB graduate students, I am struck by one story that is read aloud with feeling and power, as if in performance. The topic was to write about greatest gift ever received. In rhythmic cadences reminiscent of African American churches, the man reads a moving tale that traces back through time to when he found faith as a child. The class applauds and is invited to offer feedback. An elderly man speaks up, pensive and sweet, to say through a heavy island accent, “Thank you for reminding me of the indescribable gift. This is the season.”

Before I leave for the women’s prison, a few miles down the road, I meet with our Peer Leaders, those in the prison population that work alongside our team, and the exceptional correctional officer that works this shift in the gym each Friday and has become an integral collaborator in our program here. Together, we review the impressively thorough guidelines the Peer Leaders have drawn up for the post. They had asked me to add two new leaders and I was pondering it for the past month. Their guidelines encouraged me so we invited the two over and applauded as they happily accepted their new responsibilities. Just before I leave, our senior peer leader — a smiling punster that watches over everything with gentleness and an eagle eye — quietly pulls a three-inch canvas from his pocket. It is painted with a brilliant orange butterfly mid-flight on a green ground. I gasp with delight and surprise. Emerging from his prison blues, the impact of this butterfly could not have been brighter had it flown through the chilly concrete room and landed softly on his shoulder. I know he has had health worries of late and it seemed a particular kind of compassion to share this painting with me at that moment, before sliding it back in his pocket like a talisman.

The afternoon at the women’s prison is similarly filled with art, laughter, and moments of easy grace. As often happens when I visit, a few women very much want to tell me how much they enjoy the class. “I get to relax here,” one woman explains. I thank her and share that I too feel at peace in this creative space. I carry the feeling with me across the packed freeways back to Los Angeles. Early the next morning, I head out in the opposite direction to visit our programs at a high security prison. When I arrive, our team of teachers is gathered in the prison cafeteria for their weekly meeting, bundled and shivering against the cold, which is bracing for California. I thank them for coming on this eve of Christmas Eve but it’s unnecessary; everyone is just as pleased to be there and eager to start class. It might seem odd that we find such joy in this stifled place, a place few want to come and nearly all want to leave, but our experience is that the community we form together with the individuals here is a gift to all of us.

Together, we pass a series of checkpoints and gates and then split into groups and head to the different yards where we facilitate art classes. On one, we warm up with an innovative yoga session as our teacher manages to create a beautiful practice with large industrial chairs in place of mats. Soon after, the two painting classes begin. I haven’t been to this yard for a while and one of the students is eager to show me how much he has learned. “I brought this to show our teacher my progress,” he tells me, carefully unrolling a canvas to reveal a painting in a state of near completion. It depicts a woman in Native American dress astride a horse in a landscape that might be Arizona, or the moon, and she carries what looks to be an animal skull. As I gaze at it, he tells me about learning and improving each week but I am captivated by the image. “It feels like it has something to do with grief,” I say, and quickly add, so as not to offend in case I am wrong, and because I have doubts about my initial interpretation, “or maybe celebration.” He tells me that it is grief but not for losing someone. “She is beginning a prayer,” he says, “and we always come to prayer in grief because when we pray from suffering, this is the sincerest kind of prayer.” He adds, with a perplexed smile, that some people question their faith if their prayers aren’t answered. “But what we don’t realize,” he says, “is that we already have everything we need.”

In the next yard, our performance and poetry class is underway and I sit to listen as each student gets up to read his story about a defining moment. I am sitting next to a quiet young African American man that is slouched down in his seat as if trying not to be seen. It is nearly time to go and everyone else has read. The teacher for the day, a bubbly CSUSB student that is interning with us for the first time, looks at him with a bright smile and nods encouragingly, “It’s your turn!” He stands up and moves to the center of the circle of chairs and begins to read. Standing lightly on his feet, shifting his weight subtly in time with the rhythm of the words, he reads a story about walking home from school as a 10-year-old and being stopped by the police. He remembers being asked what he is staring at and looking immediately at the ground. He remembers the officer reaching for his gun. He remembers thinking that he was going to die. This story changed his life in countless ways. And its reverberations break my heart in pieces. None of us is separate, good or bad, just different, and with different experiences.

The day before, midway through the yoga class, I went to support an older man that was doing a seated twist in a chair and he told me wistfully that he used to be able to do all this stuff. “It’s okay to be where you are now,” I said, and tried to relate by explaining that I felt that way when I was ill or injured. But none of it felt like a good enough response. As I looked around the circle, I saw — as every yoga teacher sees — an array of human bodies, each inhabiting the same pose in a slightly different way, and added, “Wherever you are now, in whatever pose, is exactly where you are meant to be now.” But this standard yoga line didn’t work in a prison so I went further and added, “Each of us is perfect, just as we are now.” We are not separate. We have everything we need. We just need to realize it. 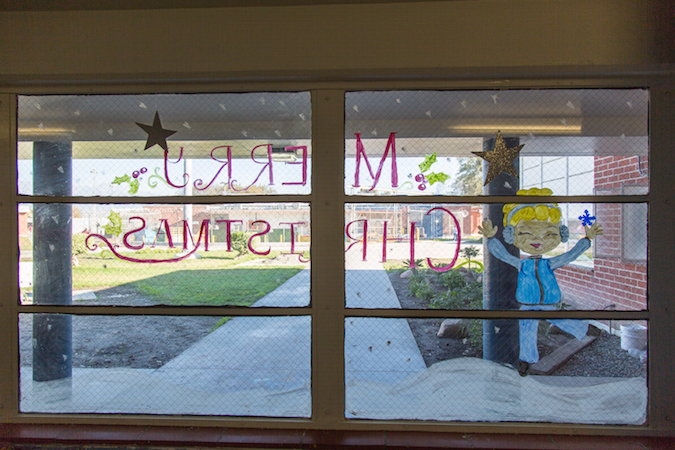