“We are not going to change the whole world, but we can change ourselves and feel free as birds. We can be serene even in the midst of calamities and, by our serenity, make others more tranquil. Serenity is contagious.”

When I entered the bright classroom, women of all ages were gathered around four rectangular tables. Most were dressed in requisite blue uniforms and some wore the optional muumuu, or as my grandmother used to call a similar garment, housedress. The energy was buzzing but each was focused on a bright square of paper in front of her, intently arranging petals in patterns. Strewn down the center of each table was a rainbow of flower petals, leaves, and seeds, both real and artificial. The women were collecting them to layer in colorful patterns on the sheets. They practiced creating their own designs while getting used to the new materials. Two teaching artists, dressed all in black to avoid any of the range of disallowed clothing — from jeans to all red or pink to khaki, anything that might resemble the garb of either inmates or guards from afar — moved around the tables like hummingbirds, shifting from one participant to another then hovering in place to assist or discuss. The atmosphere was more garden party or craft fair than prison. The women and the Community-based Art team collaborated to transform the space.

At two tables across the room, another group of women were being guided to write and share their own affirmations. They would use these as the basis for a watercolor painting of a mandala of their own design. After a time, one of the teaching artists from the first group stepped away from the flower-covered tables and began eyeing the floor between the two clusters of students. We consulted briefly and came up with a plan for the next phase of this project, where the women would create a temporary mandala on the floor. Once the space was mapped out and a few stray chairs were cleared, she explained the overall idea to the class and invited the women to place materials on the floor. They began by forming a small center, a bija in Sanskrit, or seed, to initiate the mandala. Gradually, more and more women came to place the petals, sticks, and flowers, stately pine cones and bright leaves, in ever widening circular designs on the floor. As each one gradually made her way from the tables to the floor, the conversation turned to the process at hand. Some discussed the specific way that the small yellow flowers might accent triangles formed by sticks and others marveled at the paper boats one woman had created and helped her to find just the right spot for them in the circle. Before long, all the women had migrated to the area and were seated, kneeling, standing, and reaching to join in this collective experience. The sense of organic collaboration was palpable and fueled itself, like a body in motion or a wave surging across the sea. I was swept into the process, too, adding pink petals at particular intervals around the circle and placing leaves for a woman that was chair-bound at just the spots she indicated. The beauty of the growing piece inspired each of us and bred new energy to continue. The teaching artists guided the experience with an admirably light touch, allowing the process to unfold with organic integration but stepping in for support as needed and ensuring that everyone had an opportunity to participate and share in her own way.

While some of the women actively discussed the mandala — talking about options, standing back to see what was needed, sharing ideas for points and counterpoints in the overall design — others were more intuitive, placing petals, twigs, and colorful origami papers, each delicately folded or carefully cut into shapes, around and throughout the growing circular design, a hybrid participatory project and temporary installation. At times, the younger women would dart out of the room, singly or in small clusters, and return with arms loaded with foliage and, in this way, dramatic purple leaves and bright green stalks made their way into the growing project. The room hummed with the energy of collaboration and creation. Progress was steady but felt neither rushed nor dragging; it ebbed and flowed with the group in the manner of a river or the movement of the breath. Eventually, after perhaps an hour, the mandala and its creators arrived at a natural stopping place. No one deemed it completed per se, but it became apparent, as naturally as it had started, that the process had come to an end. We were guided to sit in a circle around the mandala. Most sat on the floor and some sat in chairs, forming a round fence or frame around the temporary mandala. At first, we gazed at it, admiring the colors and patterns, the diversity of shape and texture in the materials. From there, we were guided to talk about cycles and the passage of time. What does it mean to create something temporary? How would it feel to dissolve it? How does this process of generation and regeneration relate to our lives?

The conversation was short but deep. The metaphor of change so profoundly represented in the brilliant mandala in front of us and the powerful collaboration that preceded it led to a few thoughtful reflections and, before long, to a period of silence. Each sat with her own thoughts, or breath, or spaciousness, our collective quiet forming a blanket around the moment like a warm hug or a sunny day. Most of us were smiling at that point, not the bright outward kind of smile, but the kind that arises from within and shows up in the eyes as much as in the arc of the mouth. After a while, one of the teaching artists led the group in a short guided meditation on the breath and mindful awareness. The room was quiet and peaceful. The mandala glittered with red and orange petals, blue and turquoise marbles, yellow flowers, purple leaves, and sand-colored sticks. There was nowhere to go and nothing to do but be here in this moment and this space.

After a time, we were guided to redirect our attention back to the circle and, for those with closed eyes, to open them. As we revisited the beauty of the thing we had made, the recognition dawned that it was ephemeral and would have to be destroyed. Some grew sad, already mourning the loss of the beautiful creation we had made together, and others held on a bit longer: can’t we leave it here for a while; do we have to sweep it up? We talked about the temporary nature of beauty and life. Someone mentioned that we could see the possibility for change in this project but before the conversation got too thoughtful, or mournful, one young woman in braids piped up, “Let’s take it apart!” Her bright confidence eased away the creeping mournfulness and we laughed and agreed. She took the first swipe and the group quickly followed, rustling the patterns into a colorful mass, shifting from ordered design to chaotic abstraction in a matter of seconds. When it was swept away, and the materials were placed in their respective boxes and bins, we realized that something had gone missing. The quietude and cheer briefly fused into an anxiety specific to prisons; an unaccounted for item, even for the most innocent of reasons, is cause for alarm. A misplaced pencil might not mean much to the second grade classroom but it can cause trauma at a correctional institution, bred by the looming potential of a search on the part of those incarcerated and the fear of where the item has gone and to what purpose, on the part of the facilitators and staff. The anxiety was short lived. Everyone searched and the item was found but the abrupt transition represented a more powerful shift in collective experience than the sweeping away of the group mandala. We may be consciously aware that everything changes, and may even easily process the temporariness of beauty and sweetness, but for most of us, it’s more difficult to imagine our challenges ending. When a space of struggle is rendered magically upbeat and integrated for a period of time, the shift back to reality is harder but, with awareness, it can be that much more impactful. Everything is temporary, even our struggles. If the women in this circle took anything away along with the stray leaves and assorted bright petals, I hope it was the understanding that every moment holds a bija for peace, creativity, and change. 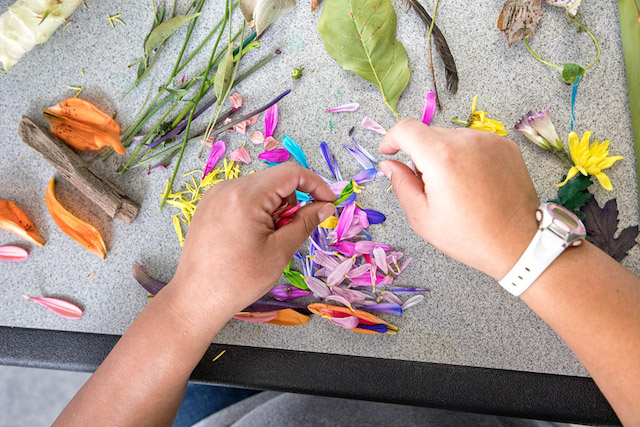