The video of Melissa Chan’s talk can be viewed below.

Democracy is personal to me. It is the reason why I’m an American — not by choice, but by the efforts of my immigrant parents, who in the early 1980s in Hong Kong already anticipated the peril of the Chinese Communist Party, and made the difficult decision to leave. This was a decade when the world held great optimism about the direction Beijing seemed headed, when its authoritarianism appeared to ease.

But here we are.

Democracy has become a bit of a dirty word. Across some three dozen countries, a median 52 percent of citizens have lost faith in the system, according to Pew Research Center. In another study looking at established democracies, only one third of those born in the 1980s believe in democracy. Compare that to attitudes of those born in the 1930s, when — for instance — 72 percent of Americans held democracy essential. That’s a 40-percent drop. Political scientist Larry Diamond calls what we’re facing a “democratic recession.”

I wonder the extent to which this has happened in part because of the US’s misadventures — and outright invasion in Iraq to nation-build — so that my generation reflexively shies away from supporting democracy, even in its defense, if not its promotion. In Europe, where I live, democracy hesitancy — to me at least — has its roots elsewhere, as a continent so prosperous and at peace by and large, that it has sleepwalked into a post-Enlightenment era of complacent placidity so that even when democracy is threatened (in Ukraine), or desired (in Belarus) — but even from within the EU with Hungary — the Union takes some action, but not enough.

As a journalist, I have reported from autocracies, from China, Russia, and even North Korea. And I examine authoritarian creep around the world. Few autocracies today look like North Korea. 21st-century authoritarianism looks different from 20th-century authoritarianism. China’s modern metropoli, for example, gleam with skyscrapers and the same abundance and efficiency you would see in a wealthy democracy. This is not East Germany and the Stasi. For one — you don’t need snitches anymore; your phone does that for you already.

When democracies and autocracies are indistinguishable superficially, it lulls people into thinking there’s really not that much difference. Combined with propaganda — and autocracies have engaged in an aggressive attempt to rewrite the narrative — universal values have become relabeled as Western values. The Chinese state, for instance, would argue that democracy is practically colonial. And of course, every autocrat jumps at the opportunity to point out democracies’ hypocrisies, which — I acknowledge — is historically abundant.

But let’s not get distracted by these bad faith arguments. Hypocrisy actually does not and should not devalue democracy — in the same way that imperfect, sinning philosophers write about virtue, or fickle poets write about everlasting love. Do we just give up on these concepts because some of their evangelists fall short of the ideals? That, to me, is too nihilistic.

Philosopher Judith Shklar put it best: “It is easier to dispose of an opponent’s character by exposing his hypocrisy than to show his political convictions are wrong.”

I am grateful for this opportunity to participate in “55 Voices for Democracy,” and am struck by the words of my fellow contributor, Rainier Forst, in his address for this series. He speaks eloquently about the importance of language, evoking Thomas Mann’s phrase, “stolen words,” for the distortion of basic terms to mean the opposite of what they intend. “Stolen words” — so that my profession, journalism, has become fake news, and I am an enemy of the people. “Stolen words” — so that democracy has become ignoble — despoiled (as previously mentioned) by its association with damaging US foreign policy, but also by the work of autocracies keen to manipulate the word. We live in democracies, but it sometimes feels as if it’s not a good look to talk too enthusiastically about it.

We must take back these “stolen words,” and reclaim them for humanity. Sure — democracy, first articulated, is Greek in origin. Europe provided the lexicon for it and its components. But just because it did, does not mean the desire for democracy, the desire for human rights, does not exist in every single one of us.

Let me share from my personal experience. For five years, I filed hundreds of original reports from China. I traveled, and I spoke to countless people. The circumstances that brought me to cross paths with them usually meant that something unfortunate had happened. Sometimes, it was a farmer who had his or her land illegally confiscated by corrupt real estate developers in cahoots with the local government. There were middle-class families who faced trouble, and found they had no recourse because there is no independent judiciary. Then, there were ethnic minorities, such as the Tibetans and Uyghurs, who faced collective, existential destruction. In so many cases, the person would say to me at some point during the interview, “I just want to be treated fairly. What happened to me — to us — was not right.”

These people didn’t reach for the word democracy. They didn’t talk about universal values or the rule of law. That’s not their vocabulary. But that human yearning for justice and equality is basic. It’s there.

Let’s own these words, and celebrate them. Let’s explain to people it’s not just about voting — it’s about that opportunity to right the wrongs. And it isn’t only about the high stakes social justice battles that might seem abstract for those it doesn’t touch, for those more focused on their day-to-day. A democratic system is also about terribly mundane things. A business dispute, where you can sue some person or entity, and know that you’ll have a fair day in court. It’s about parents who have a voice in what the state’s education system teaches their children. It’s about understanding that bad things happen to good people everywhere, but in an open society, you are empowered to fight back if need be.

Making this case is not easy. Here’s the tough truth about where things stand: We face internal and external challenges. Let me say a few words about the external ones. The beneficiaries of authoritarianism — the winners — are often also the ones most connected to the global community because of their wealth, power, and means. They use their position to argue and defend their systems. Often, they use online social media banned in their home countries to make the case for their demagogues. When we talk about “stolen words,” think about how they’ve hijacked language. Their hate speech and tools of oppression have become their “rights.” Criticism of their autocracies is automatically “racist” or “imperialist.” Question anything about the human rights violations taking place within their borders, and you are a “warmonger.” And of course, it feels as if we’re fighting with one hand tied behind our backs since we can’t make the case for a more open society on their platforms, in their countries. It’s easy to feel discouraged.

Yet, when I look at the global picture, I am buoyed by the pro-democracy protest movements in many places — from Venezuela to Thailand to Myanmar to Hong Kong. And those out on the streets are often young. They give me hope, that perhaps democracy has not entirely become a dirty word, at least to some. But then I am checked by the other truth — that despite endless weeks of protests, none of these movements have managed to take down the autocrats. Then I think about the long arc of human history, our timeline mostly and vastly a default of monarchies, empires, and despots, and I despair. Democracy is a blip on this timeline, and if we want it to persist, there can be no complacency. Every generation needs to fight for it.

Thank you very much. 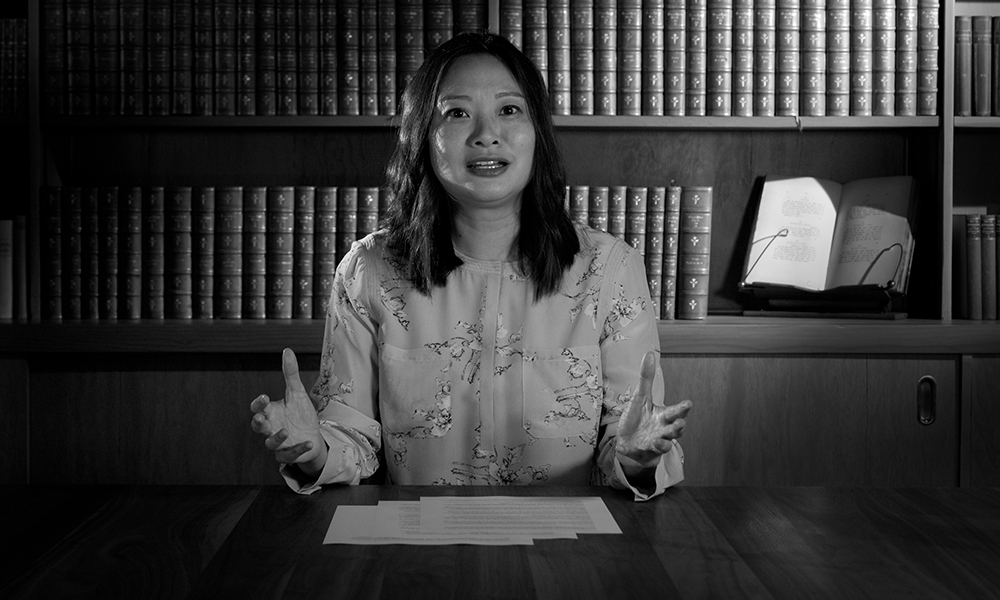