The video of Rainer Forst’s talk can be viewed below.

There is no better place in Germany to reflect on democracy than St. Paul’s Church in Frankfurt. It is a symbol of democracy’s historical tragedy as well as of its ongoing efforts to succeed. It is also the place where Thomas Mann in 1949, during the bicentennial of Goethe’s birthday, was awarded the Goethe Prize. His speech was a response to critics who castigated him, like many other emigrants, for having turned against their own country from a safe distance, and it made clear in unmistakable terms something that is also evident in his famous wartime radio broadcasts: Mann’s anger and loathing were directed against the Nazi regime and its protagonists, but he never abandoned hope that Germany might one day be able to return to the community of peaceful and democratic states.

We are still part of this history, but have the good fortune of living in different times than those that forced Thomas Mann to feel torn between wishing for the downfall of National Socialism but not for the total collapse of Germany. Yet what he wrote in his 1938 lecture about “The Coming Victory of Democracy” still holds true today: “No worthwhile possession can be neglected. Even physical things die off, disappear, are lost, if they are not cared for, if they do not feel the eye and hand of the owner and are lost to sight because their possession is taken for granted.” This, he said, also applied to democracy, which was not an “assured possession”; it, therefore, required “recollection” and “restatement” and “conscious consideration.”

In German, we have a word for extreme neglect: Verwahrlosung (“going to seed” might be a colloquial English equivalent; “deterioration” or “decay” are also close). The extreme neglect of democracy, which I want to talk about, is, however, different from neglecting a plant. It is a neglect of ourselves, because we are both its subject and object: we no longer pay sufficient attention to the specifically democratic form of our political order or of our social life — for democracy is not just a form of government but also a way of life. First and foremost, democracy is a way of thinking, because it requires a certain attitude towards oneself and others.

By the extreme neglect of democracy I mean processes of neglect that start from within, that arise from a wrongheaded but widespread understanding of democracy and that blind us to the slippage or reversal of democracy into authoritarianism — that is, the perversion (in Frankfurt it is called the dialectics) of democracy. One sign of such immanent neglect is that essential terms are starting to get slippery — giving rise to the possibility of “illiberal democracy” or of somebody shouting “We are the people” while in reality propagating inhumanity. We need to be attentive with regard to such “stolen words,” to use Thomas Mann’s phrase.

Let us start with a brief reflection about the meaning of democracy. Its basic idea is that of a normative order where those subject to the laws are simultaneously the authorities who debate and construct these laws in processes of public justification. The citizenry remains supreme legislator even if it authorizes representatives to fulfill this function. From this perspective, democracy is no fair-weather event but always engaged in conflict, especially in conflict with the forces it needs to overcome in order to even roughly realize this idea — traditionally, these forces have been feudalism, patriarchy, or class rule. Democracy permanently struggles against the obstacles that prevent it from creating a society whose members meet as equals and where inequalities need to be justified, especially to those who risk being the worst off.

The principle of majority rule, as opposed to the rule of the few, is an essential marker on the path to making democracy a reality. It turns into its opposite, however, if it leads to the rule of a new class, even of the much-cited “middle class,” which no longer cares about the poverty or fate of others as long as it believes to profit itself. Ignoring the lives of those who cannot even afford to send their children on a school trip is a clear sign of social neglect in a democracy. It finds theoretical expression in a terminological and normative separation of democracy and justice.

In Germany, the word Volk as a translation of demos carries a huge historical burden. The emancipatory political claim of popular self-rule can degenerate into the supremacy of those who believe themselves to be “real” Germans over those that do not really belong or are merely tolerated. The “nation” becomes an ethnic family that cuts itself off and shuts others out.

How much longer do people with a Turkish name have to duck if they want to assert a claim in German public offices and companies? In the former West Germany in particular, such exclusion often has religious undertones: democracy, if correctly understood, is said to be rooted in Christianity; Islam is thus considered to be incompatible with democracy and is given detention to catch up. In view of the excessive brutality of “patriotically minded” citizens against asylum seekers or simply “foreigners,” it is easy to understand why Thomas Mann in 1945 talked about Germans’ uncomfortable tradition of “völkisch bully democracy” (“völkische Rüpel-Demokratie”), which was based on the misunderstanding that having liberty means having the right “to be German, only German, and nothing else.” The völkisch notion of demos, and in particular its xenophobic and racist variants, is a mental poison that causes democracy to deteriorate. As we can see in the United States to this day, racism shapes and influences social structures also in places where the origins of the “nation” are completely different; the wound of slavery does not heal.

No less alarming is the mirror image of this neglect — namely the neglect on the part of elites who want nothing to do with the so-called “mob” and who skillfully safeguard the reproduction of their privileges while boasting of raising and preserving the intellectual and moral level of society. In almost all existing democracies you find such bubbles of arrogance, elegantly dodging calls for social democratization and the question of the justification of extreme wealth.

However, the critique of the elites goes wrong where it does not distinguish between its justification when voiced by marginalized social groups and the malice of those who, for example, castigate the decision to take in refugees in 2015 as “undemocratic” — by which they simply mean that these people have no right to be here and show that they do not care about human rights. The grievances voiced by underprivileged groups are democratically indispensable, but the blind hatred directed against even less privileged groups (who are, however, said to have more privileges) is nothing but sheer contempt for humanity.

The notion of democracy slips away if it is seen as a voluntaristic instrument of the power of the majority and not linked to basic rights ensuring the equality of all — so that it is, in fact, able to act “illiberally.” It also finds itself on a slippery slope if this equality is no longer taken seriously as an imperative for justice — whether by those “at the top,” in the “middle,” or “at the margins.” And it gets dissolved if political debates degenerate into implacable hostility, lies, distortion of facts or conspiracy theories, including the denial of climate change, the existence of a virus — or the results of an election.

One does not need a degree in dialectics to understand that at a time when states are losing more and more political and economic power because the “laws” of the global market do not play by national rules, we see a rise in the popularity of nationalist political forces that promise to “take back control” or “make America great again.” This is not about taming global Darwinian capitalism but rather about wanting to have a better place in the game. Here, a structural crisis of nation-state democracy causes a counter-reaction that combines with tendencies of extreme neglect, for example by making migrants the symbols of global threats who can only be held at bay by high walls.

Thomas Mann, who became a politically active cosmopolitan as a result of National Socialism, emigration, and war, farsightedly pointed out that the democracy of the future would not only have to be a “social” democracy committed to social equality but that it also needed to be “transnational”: “World economy, the minimizing of political boundaries…, the awakening of mankind to a realization of their practical unity, their first thoughts about a world state, — how could all this social humanitarianism — the true object of the great struggle — which far exceeds the bounds of bourgeois democracy, be foreign and repugnant to the German character?”

Let me conclude with these words from his 1945 essay on “Germany and the Germans.” And remind you that we ourselves are to blame for neglecting democracy. Nobody will or can prevent this decay unless we do it, using clear concepts and judgment. 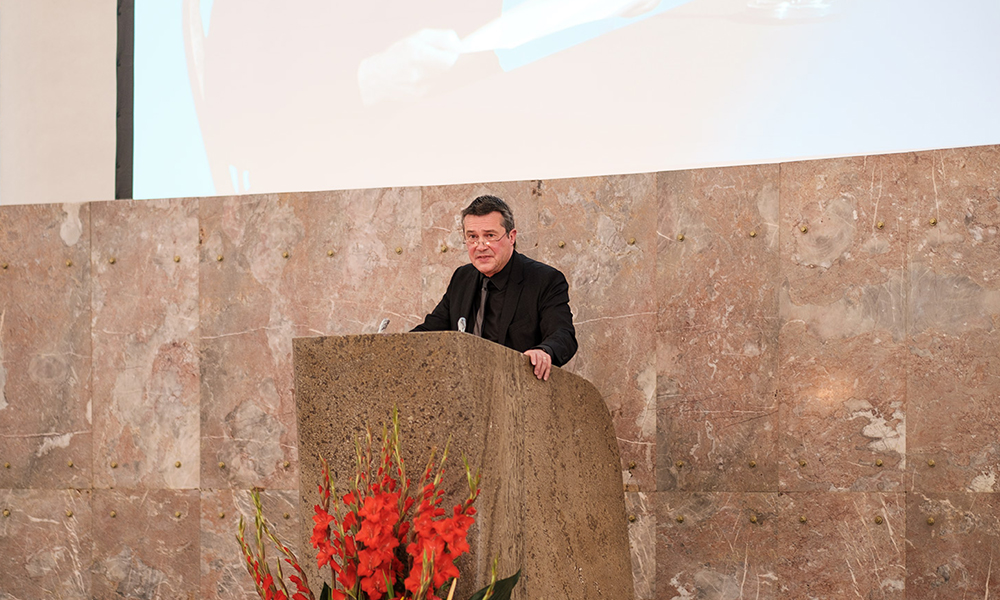