The video of Jutta Allmendinger’s speech, delivered at St. Paul’s Church in Frankfurt on September 3, 2020, can be viewed below.

This is an impressive moment. Today I am speaking to a small number of people who have gathered — have been allowed to gather — in person here in this great church, St. Paul’s Church in Frankfurt, which holds such significance for our history, but at the same time I am also speaking to many listeners in Germany, in the United States, and all over the world. This moment is not due to politics, to oppression, repression or exile — but to a virus.

By historical comparison, I dare say that we should consider ourselves lucky!

Democracy — this ancient lady with her many self-confident, high-spirited, and intrepid daughters, granddaughters, and great-granddaughters — has had a good life in Germany in the last 70 years. Tugged and pulled at from every direction, from left and right, from the underground, our democracy has put up a good fight, tough and with dignity, as befits old ladies. It is respected; a large majority — over 80 percent — of the German population stands firmly behind it. And even though the satisfaction with the functioning of democracy has often faltered over the course of these decades, it has significantly gained trust during the months of the pandemic. We can interpret this as a need for an authoritarian savior state; but it is also a tribute to a job done splendidly and often more successfully by female leaders than by male heads of government.

Maybe this trust in democracy is also a token of respect for all those who intrepidly confront the tens of thousands of protesters and COVID deniers — and whose signs read: “Let’s talk with each other!” They are seeking dialogue and, ultimately, trust.

Trust is something that lies between us. It is a constant give and take. According to Georg Simmel, trust is a solid hypothesis about how others will behave. He goes on to state that the “possession of full knowledge does away with the need of trusting, while complete absence of knowledge makes trust evidently impossible.” Trust needs encounters. Encounters create knowledge.

The trust in democracy is alive. It may come as a surprise to many, but the latest data of the Populism Barometer of the WZB Berlin Social Science Center and the Bertelsmann Foundation show that populist attitudes in the population have decreased significantly between 2018 and 2020. This trust is strengthened through elements such as the separation of powers, transparency, political debate, freedom of assembly, having a voice. The dialogue between politicians and the people, the fact that politics seeks to be responsive to the needs of the citizens, shedding arrogance and hubris — these things often happen randomly and on a small scale. But that’s okay. Grand old ladies and great young ladies do not always have to be in their Sunday best. They do not always have to be in their Sunday best — but they need to be ready and willing to engage in dialogue and personal encounters.

The virus is an ambivalent beast. It seems tame and almost endearing when it comes to family members, friends, close colleagues, the “small We,” as I call it. These relationships grow closer; one gets to know each other better — driven by care and concern for each other. But the virus shows itself to be prickly and exclusionary when it comes to strangers. It restricts our encounters in space and time, the meeting and mingling of people that have not previously known each other.

Whom among us has built new networks over the past few months? Let’s be honest! Conference calls are no substitute for personal meetings. And life is not a video conference. If we are not able to communicate with each other in person, our senses atrophy: we have difficulty smelling, feeling, seeing, hearing nuances. Our horizons contract, the bridges that connect the many “small We”s start to crumble. The big We loses even more ground.

And so we band together with people who are similar to us. We have observed this for some time in our cities: urban neighborhoods are becoming increasingly homogeneous, while the differences between them are growing. This narrowing and closing-off of social circles is facilitated by this insidious virus. So all of us have a clear mandate: Just like we fight against the deadly disease, we need to fight against the demise of social spaces.

Let us watch out for our democracy! This also means that we need to make sure that ideally everybody can participate in our society. In these days, weeks, and months, it is becoming blatantly obvious that women do not fully participate in many essential sectors in our country.

Nobody can want for women to again retreat into the sphere of the home, to work from home, side by side with their offspring, once again to become mothers who wait for their children, steaming pots at the ready, who are their children’s best private tutors and chauffeurs.

Nobody can want for women to be hidden away at home — to literally no longer be seen in public space.

Many commentators, mostly men, find evidence to refute my thesis of retraditionalization. They rejoice in the fact that men are now doing more work at home. This is true. Often, these men are on short time, and it is the women who work outside the home in systemically important, badly paid jobs that are harmful to their health.

But should we really rejoice in the fact that the time available for children is dictated by external forces? Shall we rejoice in the fact that the gender care gap grows smaller because men have so much more time and opportunity to care for their family while women need to sacrifice their sleep and the little time they have for themselves to the increase in care work?

During the pandemic, the critical load limit is much higher for women than for men. And can family responsibility even be measured in hours and minutes? Half an hour of responsibility? Taking responsibility for democracy also means doing everything possible to improve the situation of women, to pay them performance-based wages, to provide them with more options, to not erase them from the public sphere where they are still not sufficiently present.

Let’s look at the boards of the big DAX companies. More than 90 percent of board memberships are held by men. Let’s be honest: does one get appointed to boards based on home office or systemically important activities? One doesn’t succeed even under normal circumstances.

The acceptance of and satisfaction with democracy is not shared by all. It takes some degree of education and money in the pocket. The differences are enormous, and they are growing bigger and bigger. Twenty-five percent of people who are considered working class are not happy at all with our democracy, as compared to 7 percent from the upper middle class.

There is a strong link between income and education. Twenty-six percent of people with poor education and 6 percent of highly educated people are massively dissatisfied. What we are seeing right now, however, is a further growth in the participation gap and a threat to our democratic foundations. According to Heinz-Elmar Tenorth, we are experiencing a refeudalization.

It is, unfortunately, the correct term.

Of course, we who are gathered here today, are able to educate our children. We master the subject matter or at least have mastered it before. We know the rules of the game. My son had his Abitur even before he was born. But how passively do we respond to the humiliations experienced by all those who feel — and who are made to feel — like fools? Who have to tell their children that they cannot help? That they do not receive any help? These are not individual cases we can simply brush aside.

This is not something we can shift back and forth between different levels of our federal system, between municipal and Länder governments. We all can do more and need to take action if others need help. This is our duty as responsible democrats. So, in addition to the Parity Act, which aims to further the political inclusion of women, we also need measures designed to bring more working-class people and people with lower levels of education into our democratically elected bodies. And of course, we need to combat educational disadvantages.

Strengthening the public sphere, a firm “no” to the retraditionalization and refeudalization of our society are essential to further strengthen our trust in and our commitment to democracy. 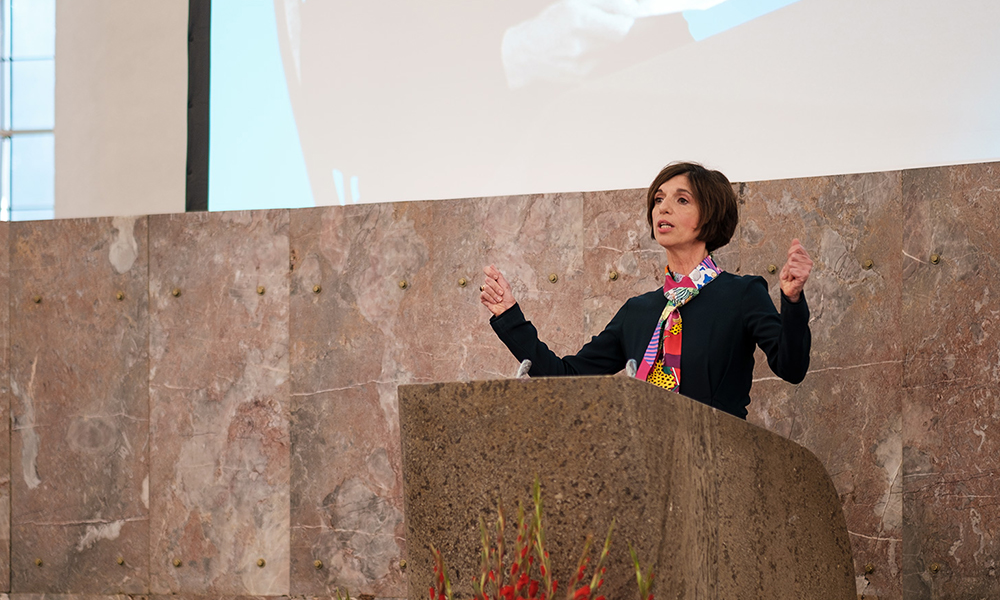