Americans tend to expect privacy in their public spaces. My enjoyment of a park is, in some ways, contingent on not being bothered by anyone else’s loud music, conversations, or sports activities. Riders in Amtrak’s quiet cars are infamous for shaming those who violate the rules of the rails (just ask New Jersey governor Chris Christie). And I’m instantly on guard whenever a fellow passenger on the Bolt Bus or an airplane attempts to strike up a conversation (though I’ll admit that some of those encounters have turned out surprisingly well). Even when surrounded by others, we Americans expect to be left alone.

Public spaces in China simply don’t work the same way, as documentary filmmaker J.P. Sniadecki demonstrates in two of his feature films, People’s Park (2012) and The Iron Ministry (2015). The former is a real-time exploration of activities in Chengdu’s central People’s Park; the latter splices together footage from three years of Sniadecki’s train rides in China. Both films demonstrate that people in China use public spaces in a fundamentally different way than Americans do: the park is a massive outdoor living room, the train a rolling restaurant/bar/hotel/community center. Privacy? Solitude? Personal space? There’s no such thing.

A Harvard-trained anthropologist who is affiliated with the university’s Sensory Ethnography Lab, Sniadecki does not produce your standard talking-heads-style documentaries. In People’s Park, Sniadecki and fellow filmmaker Libbie Cohn created a “digital homage” to the renowned Song-dynasty scroll painting Along the River during the Qingming Festival; the film explores the park in one uninterrupted 78-minute take, meant to mimic in 21st-century fashion the experience of walking and viewing the 17-foot scroll. To achieve this effect, they first had to get to know the park, its people, and its rhythms; the two spent many days walking around and talking with the retirees who frequent the space. Once they had formulated a list of things to feature and noted the times at which those activities usually occurred, Sniadecki and Cohn constructed an itinerary that would get them to all the places they wanted to cover at the moment when the most action was happening. They carried out the filming itself by taking turns sitting in a wheelchair, armed with a small video camera and a set of microphones, while the other pushed the chair at a snail’s pace along the park’s paths.

The results of all this prep work — and 23 separate attempts at capturing the single take without mishap — are stunning. People’s Park leads the viewer on a slow tour of the lush green space, moving through different zones of activity as conversations ebb and flow around the camera. There are no subtitles or captions; the content of the discussions is not important. At points, Sniadecki and Cohn stop to linger in a particular spot, showcasing the ballroom dancers, singers, and artists who use the park as their performance venue. The highlight of these interludes is the closing dance sequence, which is unexpected and enormously fun.

Although Sniadecki and Cohn cite Along the River during the Qingming Festival as their inspiration, People’s Park reminds me just as much of an earlier China documentary, Michelangelo Antonioni’s 1972 Zhongguo (Cina), which also features long, slow takes of people’s everyday lives and their interactions in public spaces. Similarly, The Iron Ministry brought to mind another, more recent, feature documentary, Fan Lixin’s Last Train Home (2009). Fan’s wonderful film has a more noticeable structure and narrative than Sniadecki’s, but the two share an interest in the common experiences of millions of travelers on the Chinese railway network. The Iron Ministry offers peeks at nearly every class and type of train running in China today, from hard-seat on the rusting old “iron roosters” of the 1980s to the quiet hum of the high-speed rail (I’ve written here before about the contrast between the different types of service.)

As in People’s Park, Sniadecki emphasizes the sensory environment of the train — especially its sounds — but The Iron Ministry is less experimental than the earlier film. It’s also more interactive than People’s Park; Sniadecki can be heard asking people questions, and small bits of conversation are translated in subtitles. Passengers discuss Tibet and modernization, China’s policy toward minorities, the challenges of finding a wife when you don’t own a home, and the changes one cutesy young woman hopes to make in her life by moving to Hangzhou.

People’s Park and The Iron Ministry are both challenging and heavily theorized films, the documentary equivalent of an academic monograph. For anyone who has lived in or studied China, they will surely resonate; both contained more than a few moments that brought back memories for me. Audience members without a China connection or interest in documentary filmmaking might find these works less accessible, but my hope is that viewers don’t let themselves be intimidated, as both films are well worth the investment of time and focus. Sniadecki’s immersive, sensory-intensive approach comes as close as I can imagine is possible to replicating the experience of walking through a Chinese park or riding in a hard-seat train carriage. For an American who prefers a comfortable buffer of personal space at all times, these activities can bring on an episode of sensory overload. But taking a deep breath and pushing through it is usually worthwhile; you never know when you’ll stumble upon a mass dance performance that completely revises your understanding of what a park is used for. And after a few good conversations on a Chinese train, you’ll never choose the quiet car again. 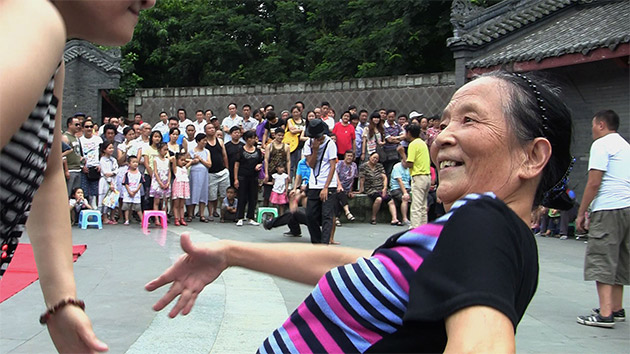